A timeless drama of intrigue, allegiance and conspiracy, Julius Caesar is the ultimate political thriller.

Caesar’s triumphant return from war causes concern about one person’s pursuit of too much power. Machiavellian machinations result in resounding consequences and throw an empire into turmoil. Shakespeare’s politically-charged play reverberates through the ages and poses questions that we still seek answers to centuries later.

The National Endowment for the Arts in partnership with Arts Midwest presents Shakespeare in American Communities. Great Lakes Theater is one of 40 professional theater companies across the nation selected to perform a Shakespeare play with a professional team of actors for middle- and high-schools and conduct related educational activities for students.

Generous support for Julius Caesar is provided by John and Barbara Schubert. 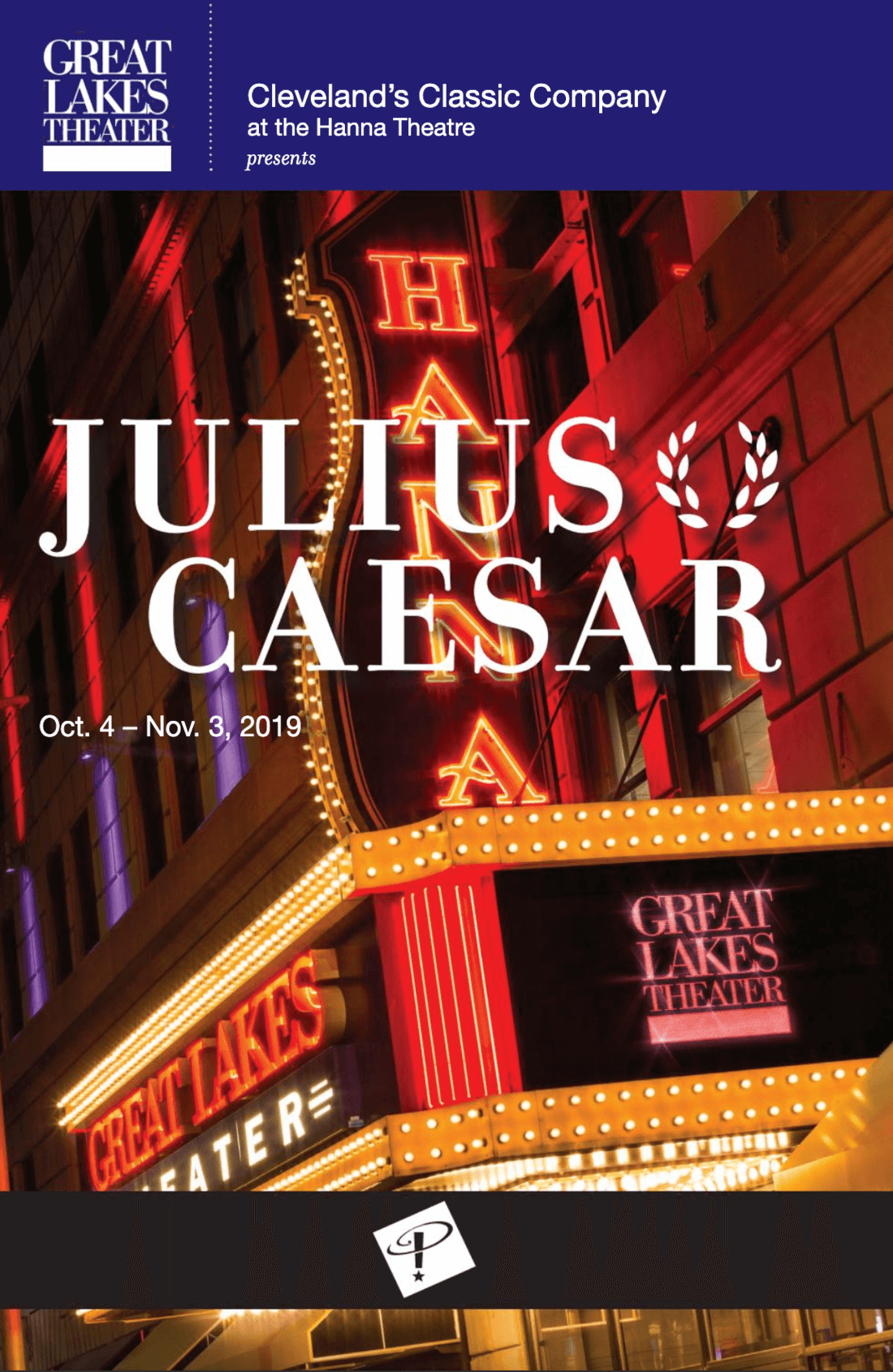 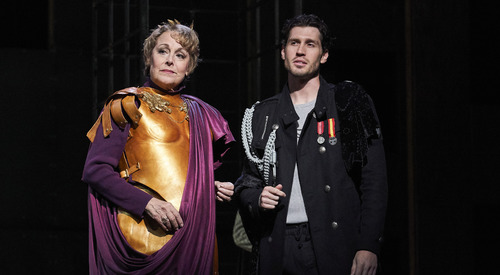 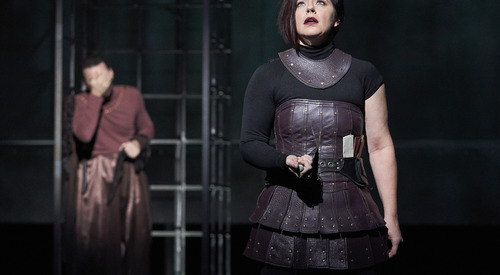 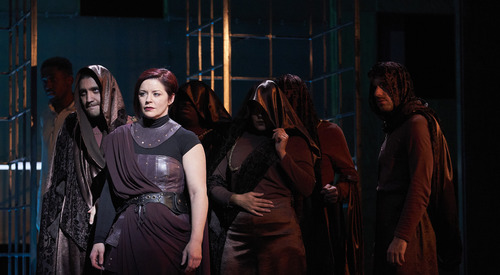 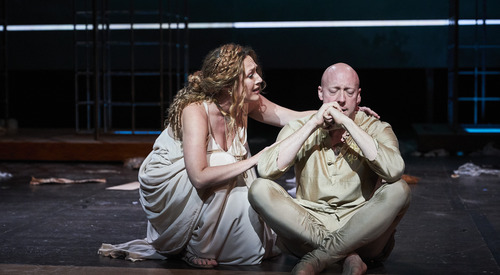 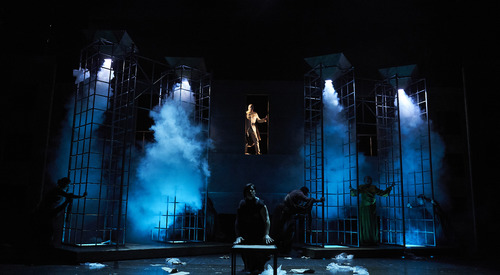 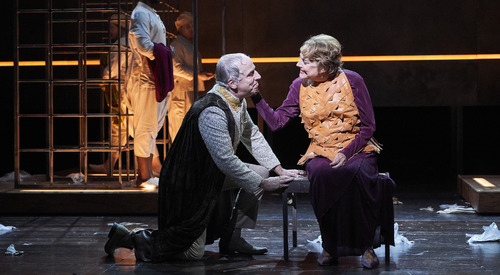 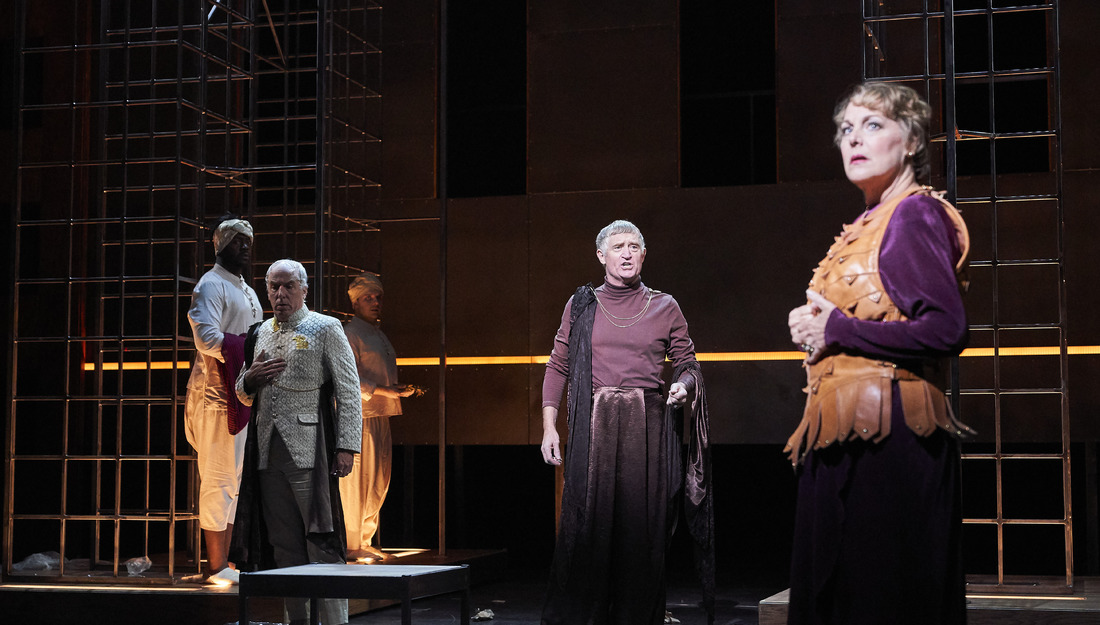 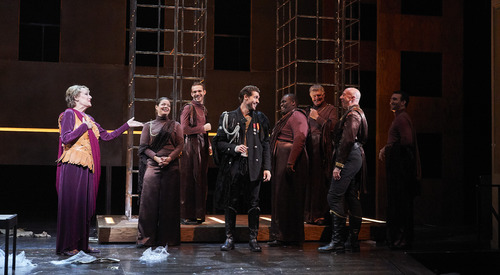 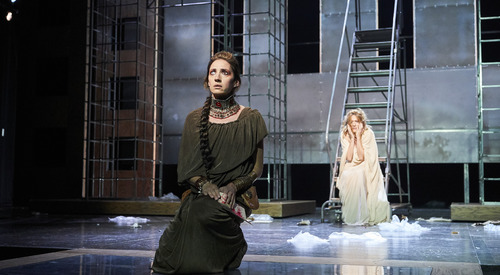 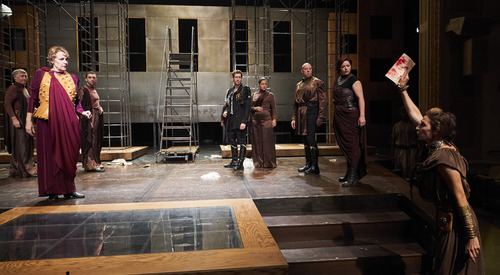 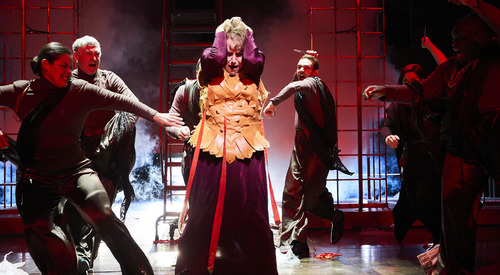 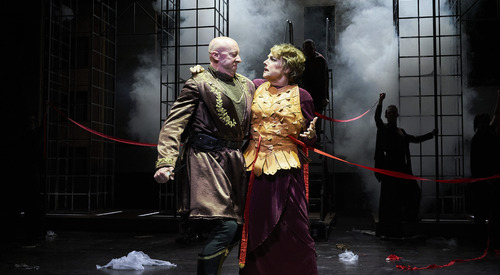 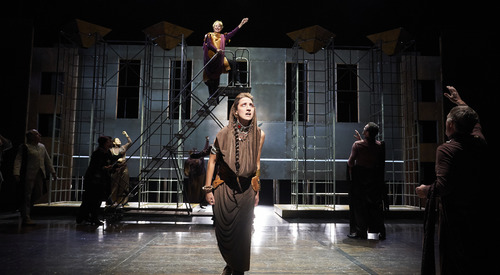 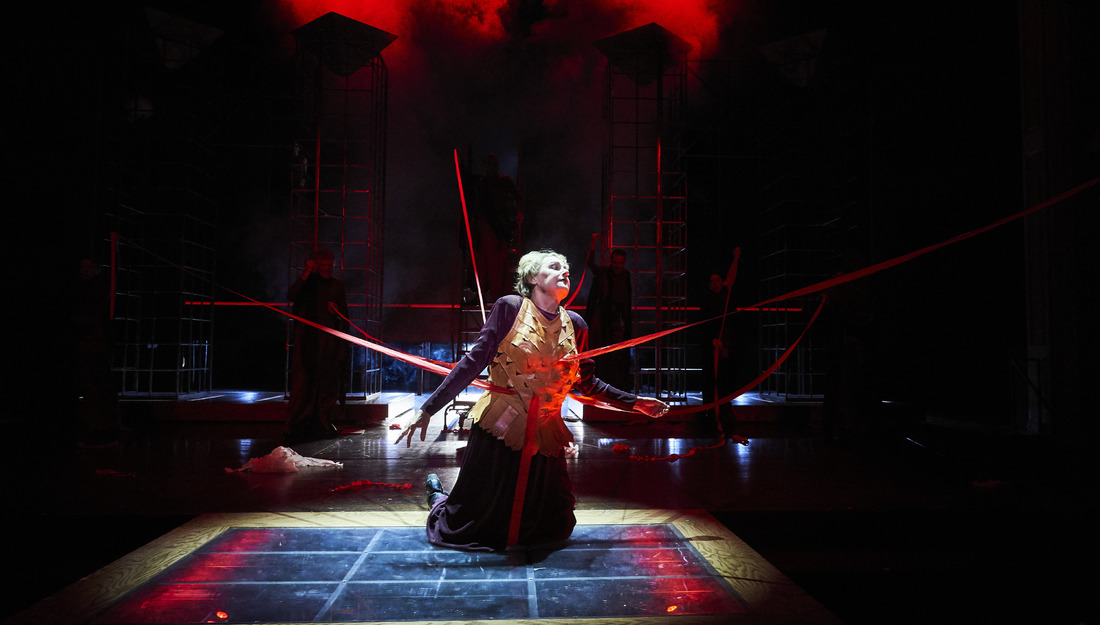 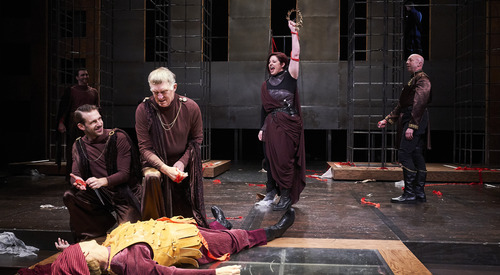 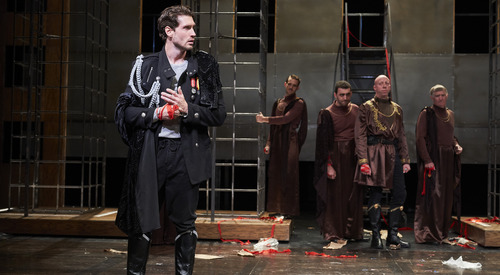 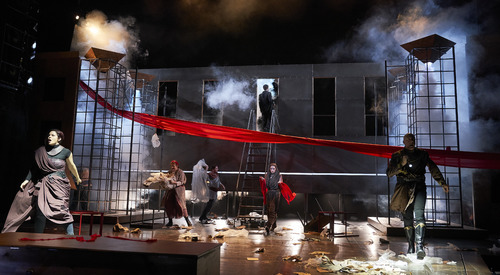 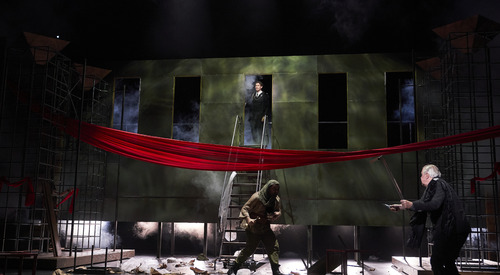 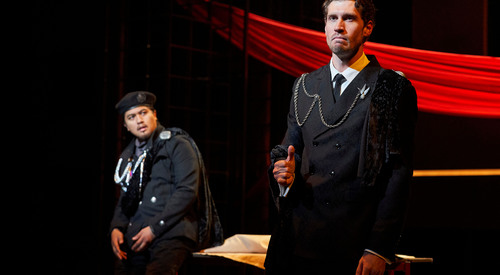 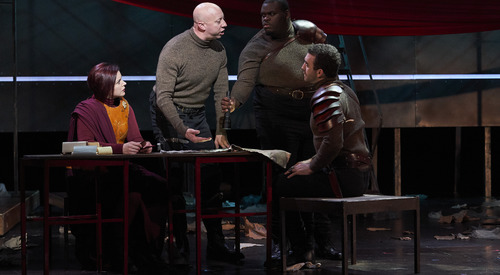 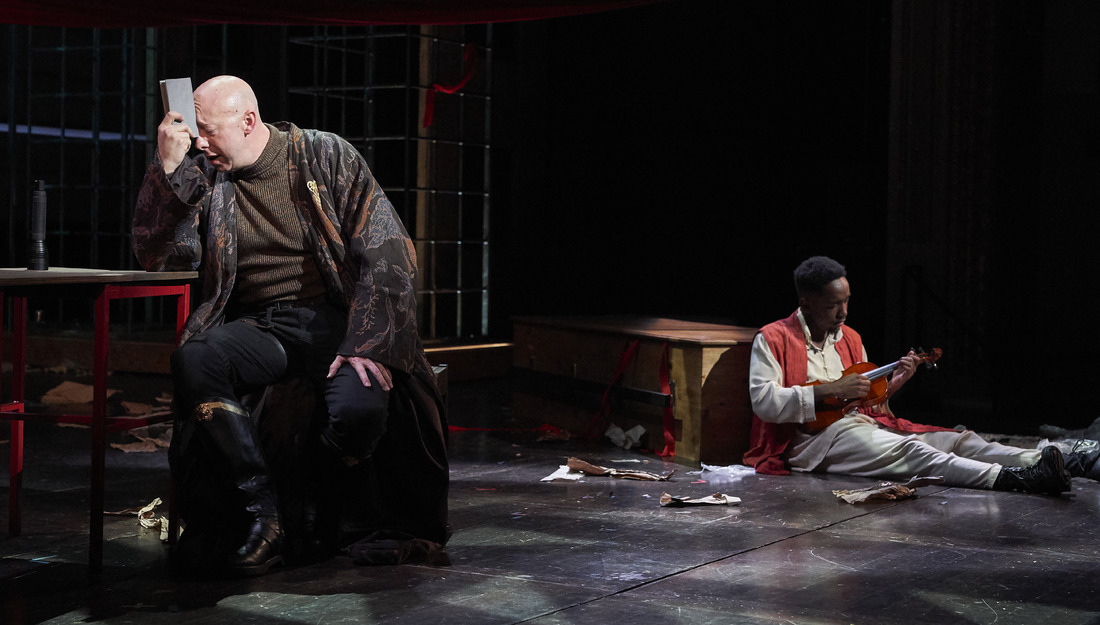 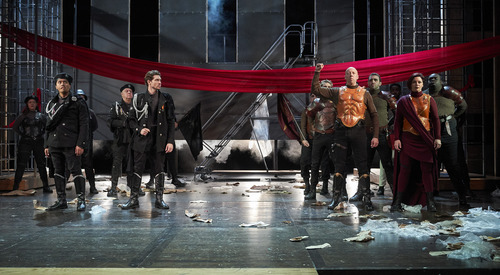 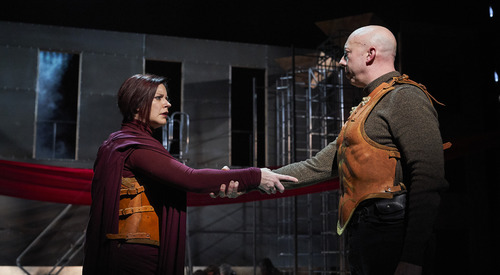 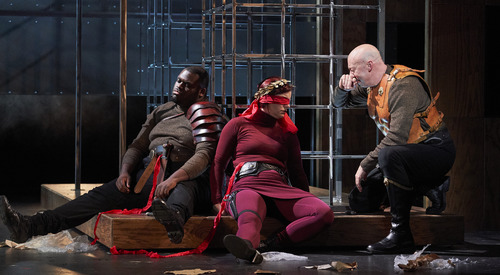 Julius Caesar enters Rome on the Feast of Lupercal as a hero beloved by the populace having triumphed first over the Gauls, then over the army of Pompey. When the senators see Mark Antony attempting three times to crown Caesar—some take this as a threat to Rome. Cassius in particular has serious misgivings about Caesar’s ambition. To offset Caesar’s support base, Cassius makes overtures to Brutus, a nobleman known for his integrity and idealism; if Brutus were to support it, a conspiracy would seem more palatable to the citizens of Rome. Brutus is also a close friend of Caesar, which adds to the moral dilemma presented in the play.

As a metaphor for the coming action, a great storm besets Rome. Brutus ponders his course of action, realizing that the conspiracy may well have to contemplate assassination. Eventually, with the prodding of Cassius and others, Brutus comes to rationalize such an act as necessary for a greater good. Brutus dissuades the conspirators from slaying Antony as well. Caesar, warned by a soothsayer, ignores advice to the contrary and pays a visit to the Senate and is stabbed to death by Brutus, Cassius, and the rest of the conspirators.

Mark Antony strikes a truce with the conspirators, asking to accompany Caesar’s body and speak the funeral. Brutus agrees, and at the funeral delivers an oratory that explains the reasoning for the assassination. Antony follows with the well-known “Friends, Romans, countrymen” speech, commonly a soliloquy, and through his masterful use of irony stirs the crowd—which to this point had been solidly behind the conspirators—to call for the blood of Cassius, Brutus, and anyone else associated with Caesar’s death.

Antony then plots with Octavius (nephew to Julius Caesar) and Lepidus to wrest control of Rome by force. Their ruthlessness exterminates many of the original conspirators, as well as other perceived enemies. Brutus and Cassius meanwhile raise armies against them. In a final battle, Brutus initially has success against the forces of Octavius; Cassius however, chooses to end her life when bested by Antony’s army. Faced with both Antony and Octavius, Brutus’ army is defeated, and Brutus takes his own life rather than be taken captive. Upon discovering the body, Antony laments the tragic fall of Brutus, calling him the noblest of them all.