When an aging monarch resolves to retire and divide his kingdom among three daughters, his sense of reason is suddenly shattered by the surprising emotional storm that ensues. Stoked by fierce winds of treachery, the tragic tempest plunges both king and kingdom into chaos. As his life hangs in the balance, a once proud monarch is forced to wrestle with morality as he confronts his own mortality.

Our production of KING LEAR is part of Shakespeare in American Communities, a national program of the National Endowment for the Arts in partnership with Arts Midwest. 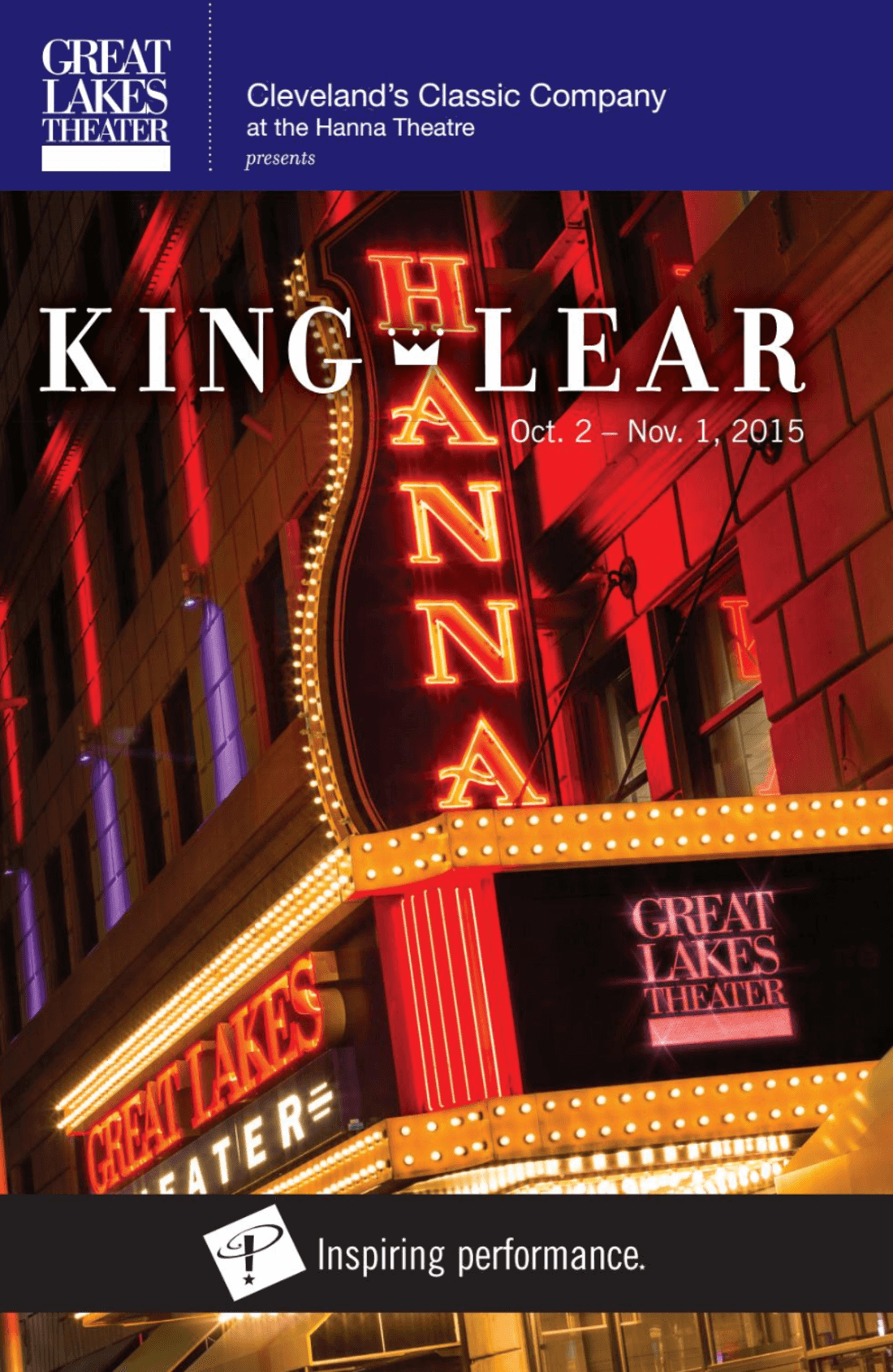 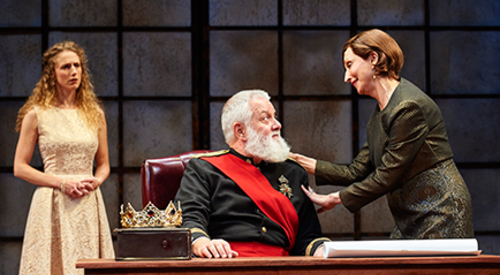 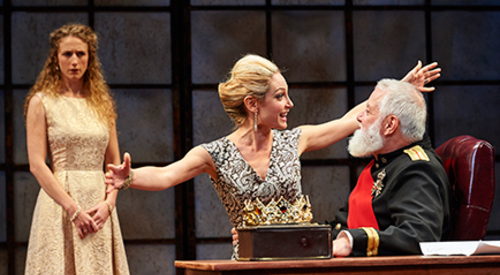 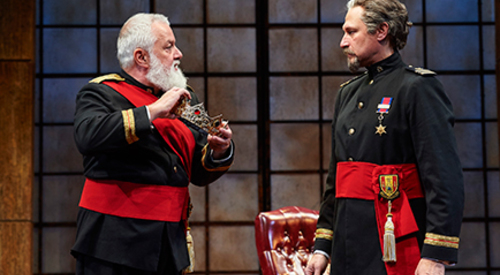 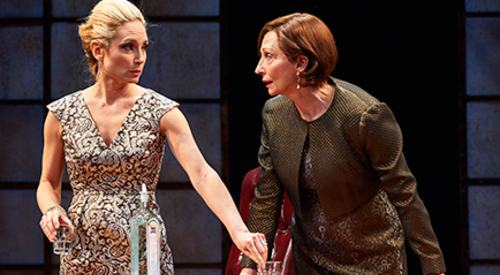 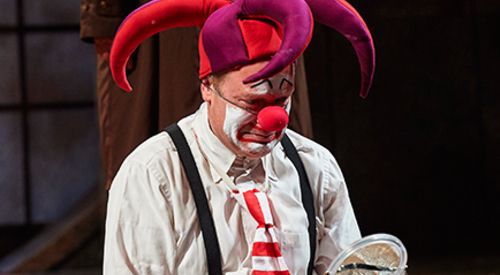 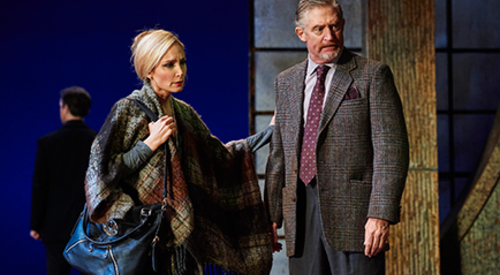 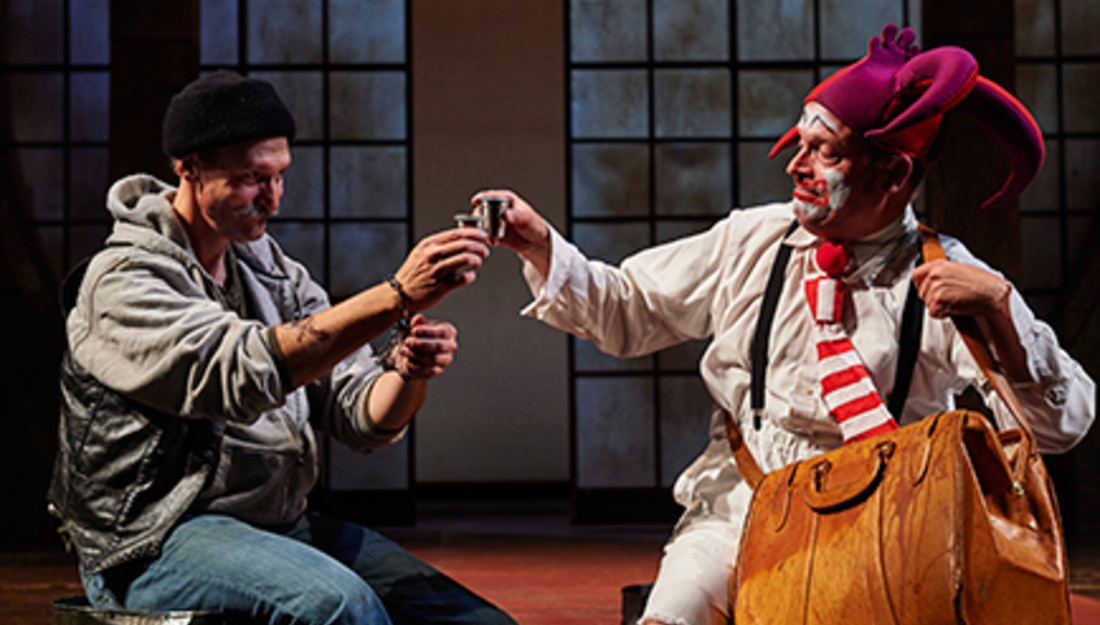 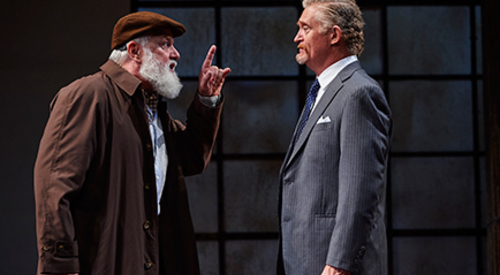 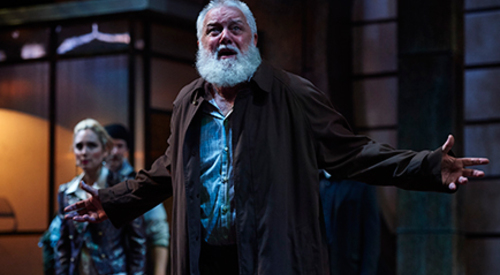 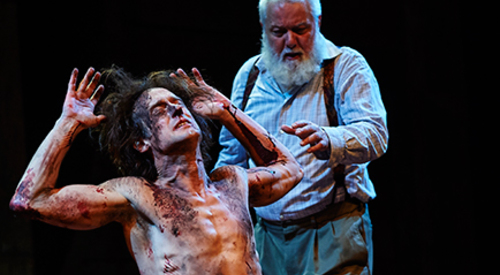 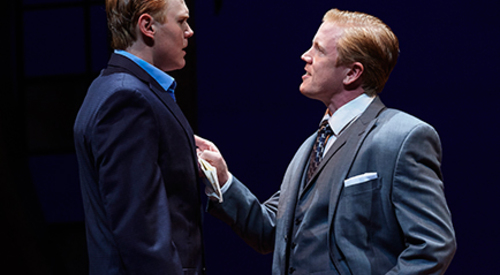 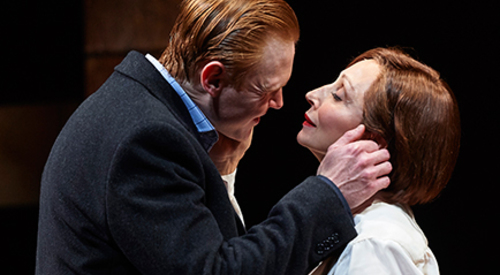 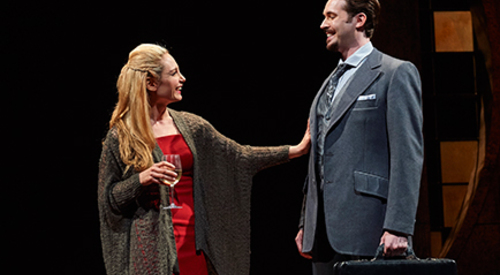 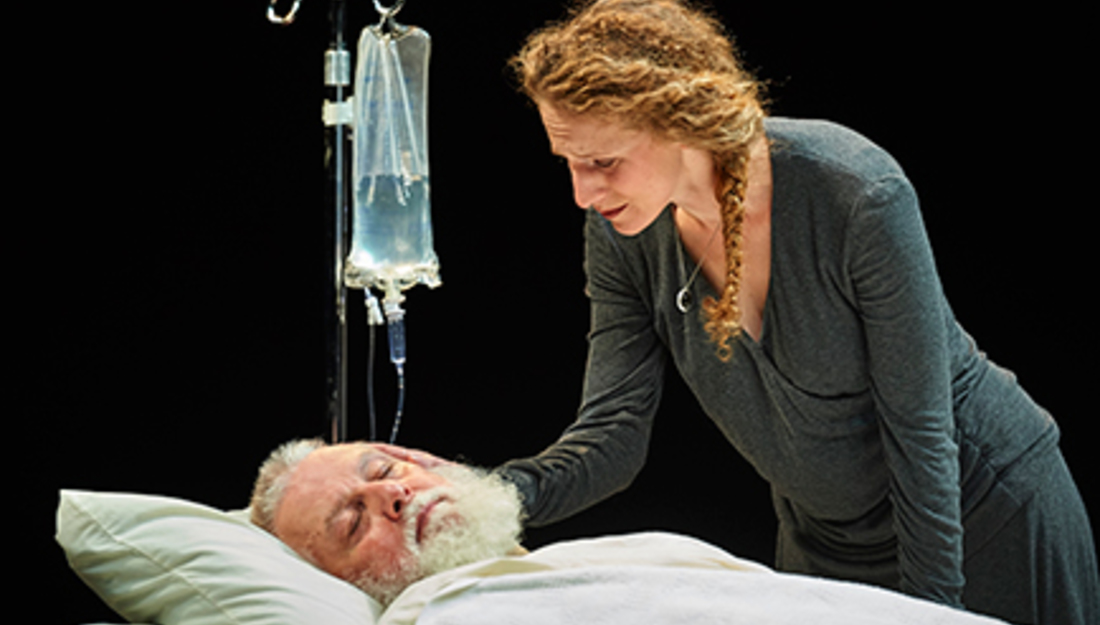 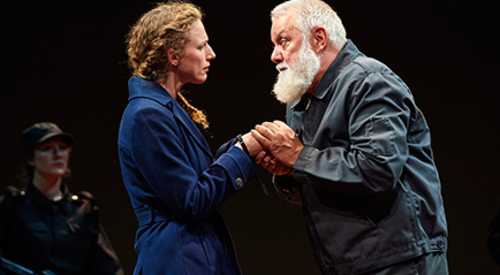 King Lear announces his intention to abdicate his power to his three daughters. His eldest, Goneril, is married to the Duke of Albany, his middle child, Regan, to the Duke of Cornwall. The Duke of Burgundy and the King of France are at the Court, both to woo Lear's youngest daughter, Cordelia. Before revealing the details of the division of the kingdom, Lear asks each of the daughters to tell how much she loves him, intimating the largest share will go the daughter who expresses the most affection. Goneril speaks an embellished expression of endearment and Regan does her best to follow suit. Cordelia remains silent, and when pressed, offends both her father and sisters, saying that it is only natural that her future husband will have half her love. Lear flies into a rage; he disowns Cordelia, leaving her share of the kingdom to Cornwall and Albany to “digest.” He banishes his faithful ally, the Earl of Kent, for coming to his daughter’s defense and does his best to discourage her suitors. The King of France refuses to be dissuaded, and agrees to marry Cordelia without a dowry and they leave for France.

Lear and his Knights visit Goneril and Albany’s estate on a hunting trip. When she criticizes the behaviors of the Knights and Lear’s Fool, Lear lays a hurtful and devastating curse of infertility upon her and storms off to stay with Regan.

Fleeing the manhunt his father has set for him, Edgar disguises himself as a religious beggar, calling himself “Poor Tom.”

Regan and Cornwall visit the Earl of Gloucester, hoping to secretly enlist him in a civil war against Goneril and Albany. Lear, accompanied by the Fool, tracks Regan to Gloucester’s estate and is angered to find his messenger (Kent in disguise) placed in stocks on Cornwall’s order. Goneril arrives and the daughters join forces to demand that Lear dismiss his Knights. Lear flees into a freezing thunderstorm, accompanied by the Fool and the disguised Kent.

Cornwall and Regan arrest Gloucester for his aid to Lear; they accuse him of treason before Cornwall savagely blinds him. Cornwall receives a mortal wound from a servant who comes to Gloucester’s defense. Edgar, in the disguise of “Poor Tom”, discovers his father being led by a faithful servant. At Gloucester’s request “Poor Tom” leads him toward the cliffs of Dover, where the old man intends to take his own life.

Edmund and Goneril, having become lovers during the journey, arrive at her estate. Albany castigates his wife for her cruelty to her father.

A French army, led by Cordelia in an effort to rescue her father, lands at Dover.

Regan, newly widowed and jealous of Goneril’s intentions towards Edmund, tries to entice her sister’s servant to let her read a letter Goneril has written to him.

Edgar deceives the despairing Gloucester into believing that he is on the precipice of the cliffs of Dover, rather than on level ground, and convinces him that he has survived his attempt at suicide.

Lear, wandering the countryside in his madness, stumbles upon Gloucester and Edgar. As Cordelia's army prepares to meet the English forces she is reconciled with her father, who begs her forgiveness. The English, led by Edmund, defeat the French. Lear and Cordelia are captured and Edmund secretly gives a command that they be executed. Edgar kills Edmund in a duel and tells Albany of his father’s death. Goneril, jealous of Regan’s romantic and political alliance with Edmund, poisons her. Goneril commits suicide after Albany exposes a plot between her and Edmund to kill him. Cordelia is executed in prison and Lear dies from grief at her passing. Kent, broken from the many sorrows, leaves to die and it is left to Edgar to lead the country out of a cloud of sorrow and regret.

Lovers of Shakespeare may differ on which play stands as his finest artistic achievement, but gather a group of theater artists for drinks and shop-talk and they’ll likely agree that King Lear, with its titanic range of emotion, vast physical landscape, dark ironic humor, and snarl of mysteries, contradictions, ambiguities and paradoxes, render it one of the theater’s greatest challenges to realize in performance. From the opening moments, Lear is ferociously intense as family resentments and fragile egos ignite an ungoverned rant of rage that unleashes betrayal, barbarous cruelty and civil war. Every character, from monarch to lunatic beggar, is set on a struggle for sanity and survival in a ravaged kingdom.

There have been an abundance of notable productions of Lear in recent years and the play’s current popularity is a testament, not only to its brilliance and theatricality, but also to its timeliness. King Lear is very much a story for the early years of the 21st century. The personal and political miscalculations, self-serving ambition, cruelty, paternalism, sexism, and emotional detachment portrayed in this 400 year old play are shockingly contemporary in the context of such horrors as torture, genocide, subjugation of women and barbaric acts of terrorism that have grown to be an everyday part of our awareness. A modern viewing of the play can’t help but invite comparisons between Shakespeare’s Renaissance imaginings of devastation in a kingdom gone mad, and images of chaos and suffering on our computers and television screens that are burnt into our consciousness. Shakespeare’s depiction of a “tipping point,” a disastrous chain of events that ruptures the perilously fragile membrane separating civilized order from chaos—setting life as we know it hurtling down a slope to extinction with inexorable speed—is a frighteningly plausible outcome of any number of present-day conflicts. His investigation of the dilemma of the dispossessed and aged finds immediate resonance in our communities. His questioning of the elusiveness and mysteries of cosmic justice and the existence or absence of a heavenly plan for us on earth parallels our contemporary discord on matters religious, political and philosophical. And as theater, the play is uncannily modern in the way a master playwright allows language, thought, imagination and gut-wrenching emotional intensity to trump realism in the brilliantly simple and imaginative theatrical devices he constructs for his epic tale.

King Lear’s consistent thwarting of our impulse to draw a clear moral message from the story is yet another astonishing aspect of its modernity. Any “lesson” that we find in one part of the play is nullified somewhere else. For example: we learn through suffering and pain; or conversely: the randomness of suffering and pain proves the pointlessness of existence. Or supernatural powers have a plan for us, or no plan, or are just, or unjust, or are vindictive, or sadistic, or arbitrary, or not there at all. Ultimately, this restless questioning as to “what it’s all about” rides tandem with Shakespeare’s gripping story to create one of the most compelling combinations of thought and action in dramatic literature.