Much Ado About Nothing

Beatrice and Benedick would rather exchange scorching insults than sweet nothings.

However, the pugnacious pair is forced to forge a partnership in order to defend house and honor, and salvage the true love of Hero and Claudio after deceptions destroy the lovers’ wedding day. Will the earnest endeavor to restore a young romance elicit an unexpected change of heart for the effort’s unlikely collaborators as well?

Much Ado About Nothing Playbill 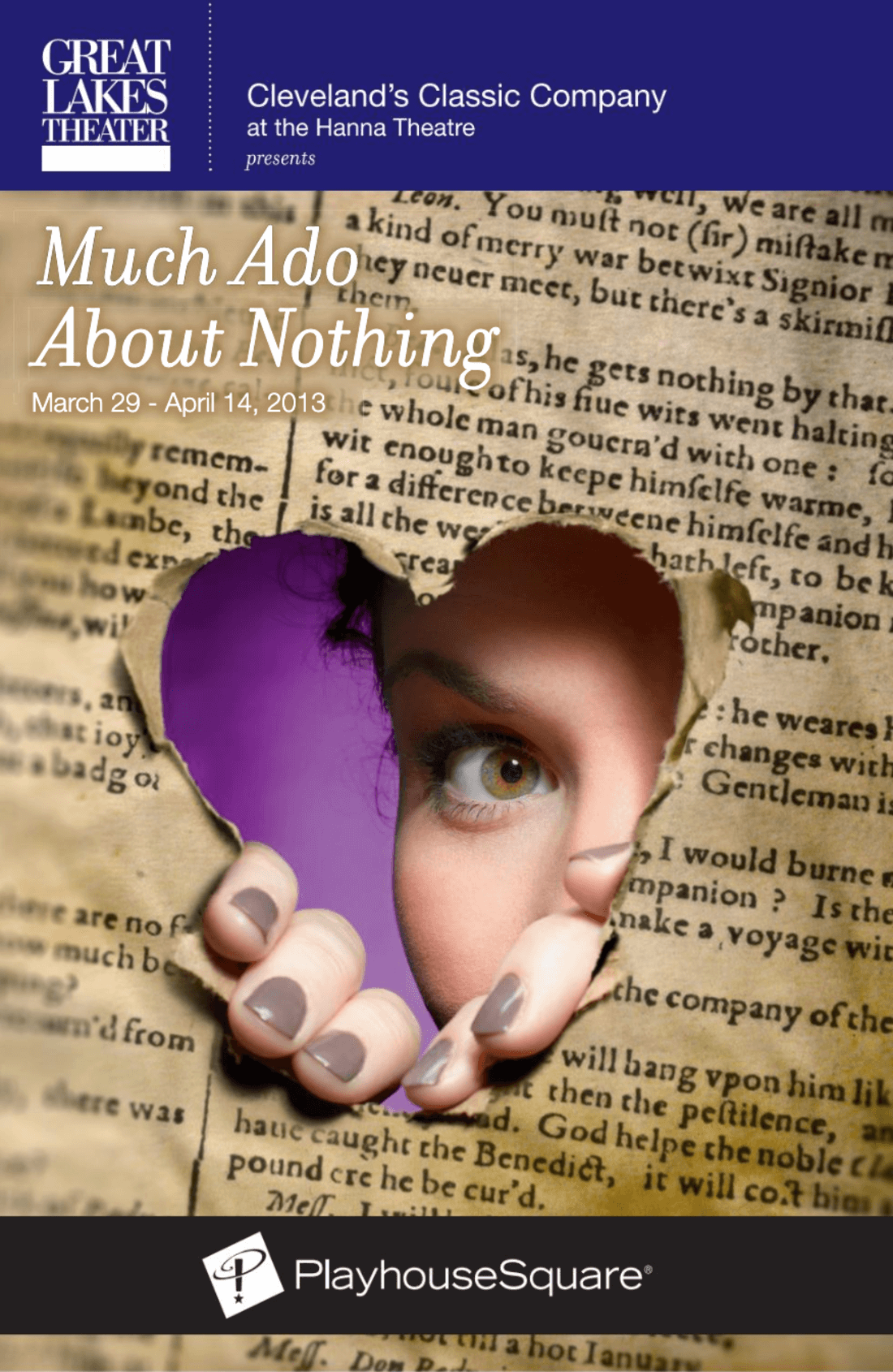 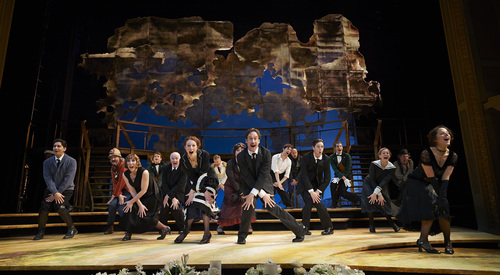 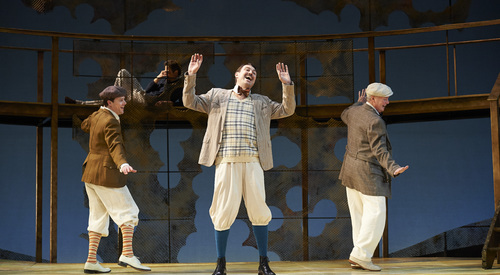 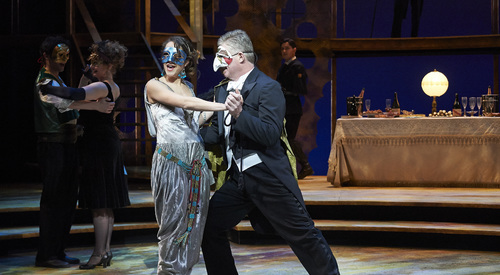 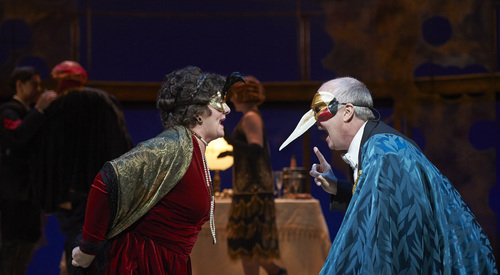 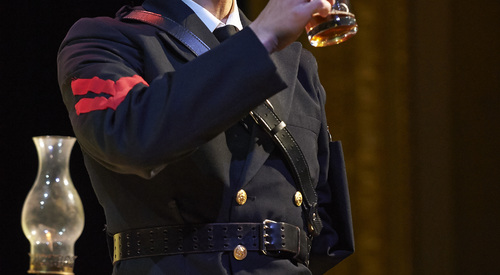 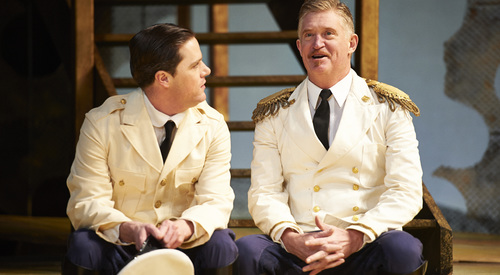 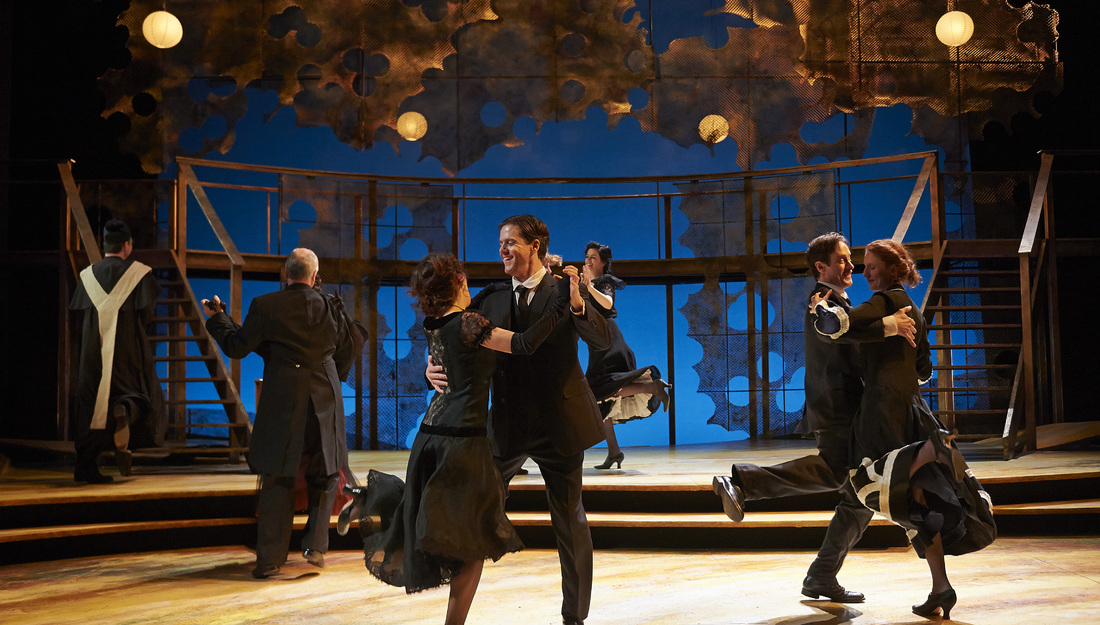 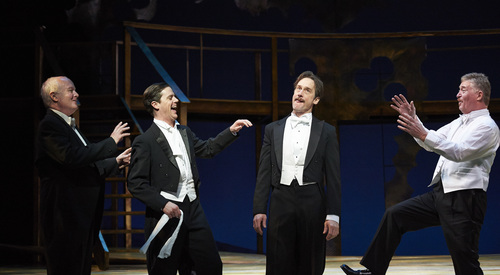 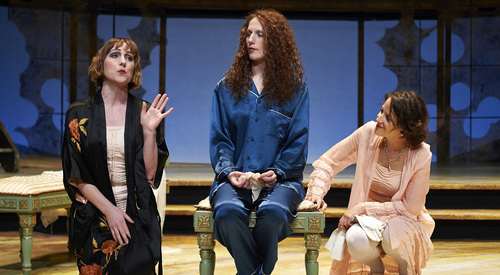 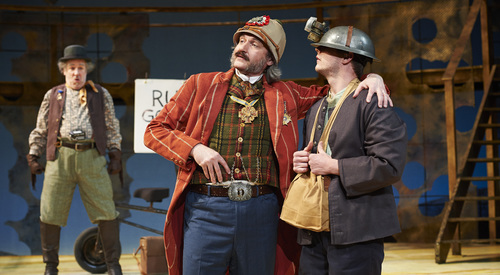 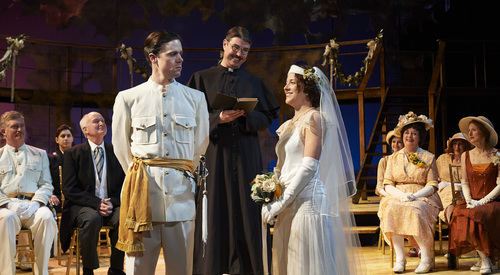 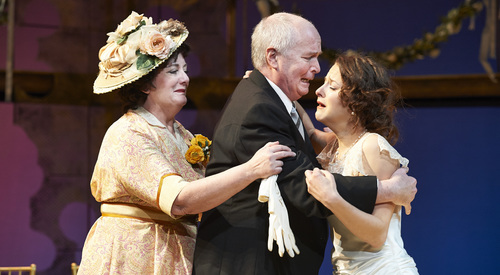 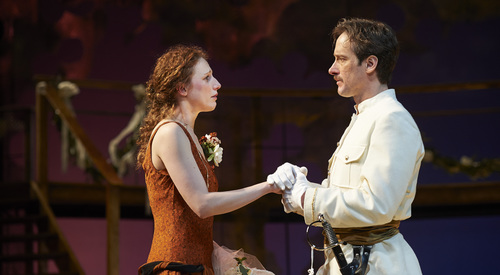 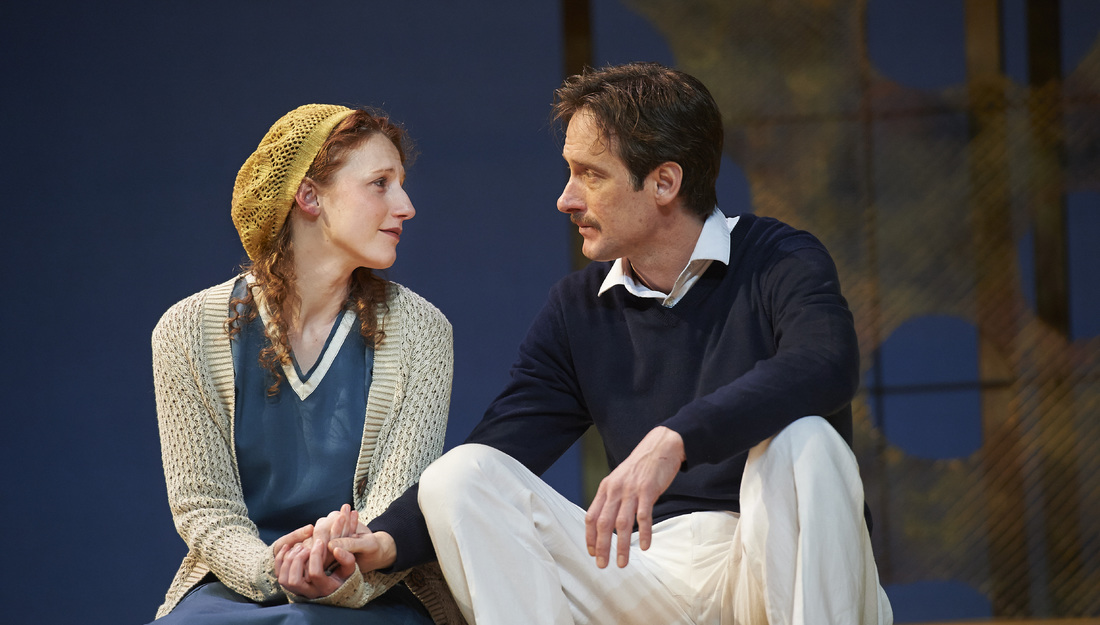 Don Pedro, Prince of Aragon, has not only forgiven the intrigues of his bastard brother Don John, who recently led an unsuccessful rebellion against him, but he includes him in his unit as he goes to visit Leonato, governor of Messina, together with two young noblemen, Benedick and Claudio, who have served him with great distinction in the recent war.

As Don Pedro and his group arrive, we meet Leonato’s daughter Hero, and his spirited niece Beatrice. Beatrice appears to have had some sort of prior relationship with Benedick, and when they meet again they begin their customary witty bantering and scornful repartee. Claudio is attracted to Hero, and tells Don Pedro of his love. The Prince offers to help Claudio in getting Leonato’s consent, and begins to personally woo the girl for her lover by impersonating him at a masked ball that evening. Two followers of Don John, Borachio and Conrade, hear of the plan and tell Don John who insinuates to Claudio that Don Pedro is faithlessly making love on his own account. This suspicion quickly evaporates, however, when the Prince and Hero appear with Leonato who consents to the young soldier’s suit and arranges for a wedding in a week’s time.

Don Pedro, an inveterate matchmaker, proposes to Leonato and Claudio that in the interim they undertake to make Benedick fall in love, in spite of his denunciations of marriage. Hero and her companions, Margaret and Ursula, concoct a similar plan with Beatrice.

Meanwhile, Don John’s malicious mind has turned upon the impending marriage as an opportunity to bring humiliation on his brother and Claudio who has gained military glory. Realizing how easily he can play upon Claudio’s nature, he lays a plot to bring Don Pedro and Claudio to witness what will seem to be an illicit meeting between Hero and a lover. Claudio is furious when he sees the woman he assumes to be Hero in another’s arms. In fact, this pair is actually Don John’s companion, Borachio, and his lover, Margaret who is an unwitting accomplice in the plot. In his fury, Claudio determines to be revenged in public for his damaged dignity, and Don Pedro consents to accompany him to the church where, as the ceremony begins, he harshly repudiates Hero before the assembled guests. Hero, stunned and hurt, drops in a dead faint into Beatrice’s arms whose cry of anger brings Benedick to her side as the others leave.

The level-headed Friar Francis strongly suspects Don John of villainy and suggests that Leonato give out the report that his daughter has died, and await developments. In the tense moments that follow, Benedick and Beatrice confess their love for each other, but the soldier in Benedick at first recoils in horror when Beatrice commands him to kill Claudio, his old comrade and constant companion. However, he soon arrives at Beatrice’s point of view believing that the man who broke the heart and smirched the honor of the innocent Hero must die, and seeking him out he challenges Claudio to a duel.

At this juncture, the sexton, knowing of Hero’s public disgrace, solves the whole problem in a trial where Dogberry, the local constable, tells an involved story of how he and his watchman having arrested Borachio and Conrade, Don John’s henchmen. Later, Don Pedro recognizes the men, and Borachio verifies the story of Don John’s vicious plot that the watchmen overheard him tell Conrade while drunk. Claudio, genuinely distressed, offers to make amends through any penance Hero’s father may prescribe, and accedes at once to Leonato’s request that he publicly demonstrate his belief in his dead love’s innocence by hanging an epitaph on her tomb in a ceremony of song which he vows to repeat yearly, and by marrying Leonato’s niece and heir who exactly resembles his lost daughter.

When Claudio is married the next day, he joyfully discovers his veiled bride to be Hero herself. Benedick, who has just asked the good friar to marry him to Beatrice, all but loses her through a sudden tiff, but love poems written by each of them are produced which cannot be denied, and they finally declare they are marrying out of sheer pity for one another. Gaily swinging the party into a dance, Benedick bids his Prince, Don Pedro, to get himself a wife, and put off until the morrow all thought of the punishment of Don John who has just been captured in his flight from Messina.

Scholars place Much Ado About Nothing solidly in the “middle years” of Shakespeare’s comedies. Appearing on the scene in 1598 (or 99), it comes after the early comedies Two Gentlemen of Verona (1592), The Comedy of Errors (1592-93) and TheTaming of the Shrew (1594-95). With its first production in either 1598 or 1599, it is positioned after those early forays into comedy, but before As You Like It, which appeared later in 1599, and Twelfth Night in 1601-2. One can feel the strong residual influences of Kate and Petruchio in Beatrice and Benedick’s verbal sparring, but it seems as if, by Much Ado, Shakespeare began to give more of a “voice” to his female comic lead, as one would never find Beatrice kissing the foot of her husband!

The wonderful raucous energy of Shrew is preserved in the central couple of Much Ado AboutNothing and in the comic subplot,but a note of melancholy and sadness enters the comic picture. The play begins with soldiers returning from war. Granted, not much is made of this fact in the course of the play. Shakespeare doesn’t weave it into the central texture of the plot as much as he does the exile to the forest of Rosalind and her father in As YouLike It, or the shipwreck and supposed death of a brother in Twelfth Night, but it is there nonetheless. Also, Benedick and Beatrice have had some kind of relationship before, as we can see from the following exchange:

D. Pedro: Come lady, come, you have lost the heart of Signior Benedick.
Beatrice: Indeed, my lord, he lent it me awhile, and I gave him use for it, a double heart for his single one. Marry, once before he won it of me with false dice, therefore your grace may well say I have lost it. (II, 1. 257-64)

This earlier attempt at a relationship doesn’t appear to have ended on an altogether happy note. Even though it is clear to all the other characters in the play, and to the audience, that this couple belongs together, experience and more than a little bitterness keeps them from seeing that themselves.So many of my friends and colleagues cite Much Ado About Nothing as their favorite Shakespearean comedy. Why is that? It doesn’t have the perfect poetic symmetry of A Midsummer Night’s Dream with its down-to-earth, mostly prose language. It doesn’t have the iconic cross-dressing leading ladies of As You Like It or Twelfth Night (although Beatrice certainly wants to put on the pants and eat Claudio’s heart out in the marketplace). It doesn’t have the famous speeches of As You Like It, or the masterfully worked out subplot of Twelfth Night. But what it does have in spades is this wonderful central couple. These are two people we can relate to, and their mature and beautiful realization that they want each other, and enjoy each other, and actually need each other is one of the most fulfilling and moving of Shakespeare’s creations. Every time I read this simple exchange between Beatrice and Benedick in Act V, I get teary.

This advice, so simple but so human, comes from a character who, like his author, truly understands the healing power of love.

Our production is inspired by many things: the Tuscan countryside; various social and aesthetic movements in Europe post-World War I, including the rise of the “new woman;” the spirit of the wild parties of the Jazz Age; and even the early silent movies from Keystone, particularly The Bangville Police. We hope you enjoy our exploration of this most human comedy.

–Sharon Ott
Director, Much Ado About Nothing