Playfully presided over by an outrageously rambunctious Emcee and bursting with a bevy of Broadway’s greatest hits, this Tony Award-winning tale of love, war and the struggle to survive in tumultuous times disarms and delights. 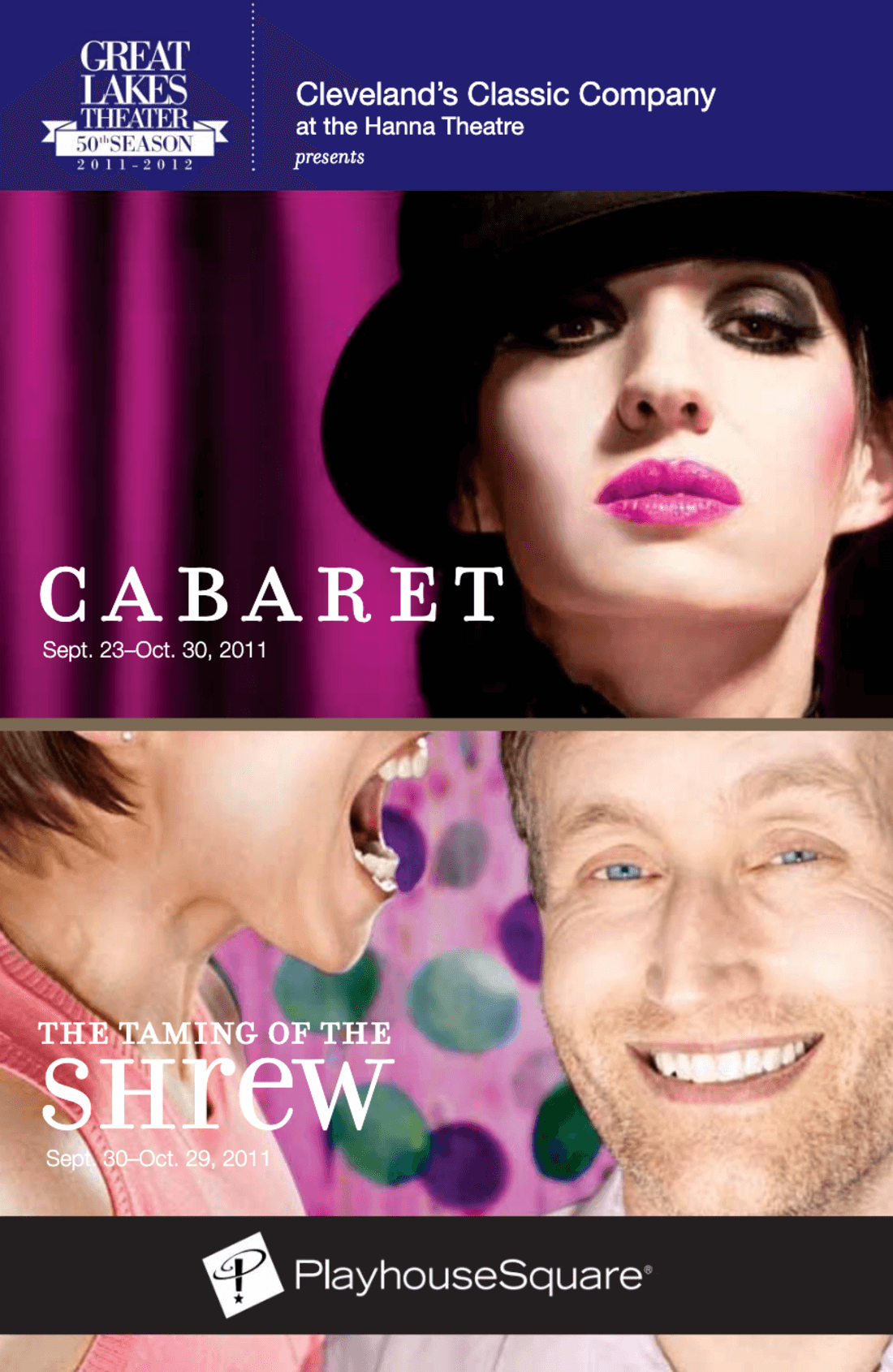 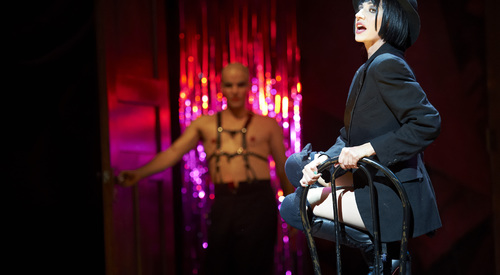 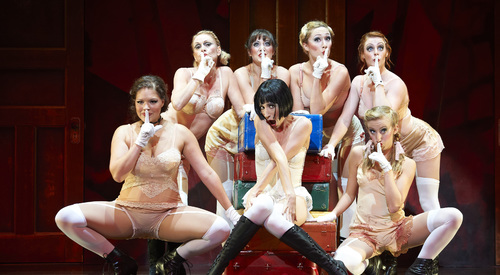 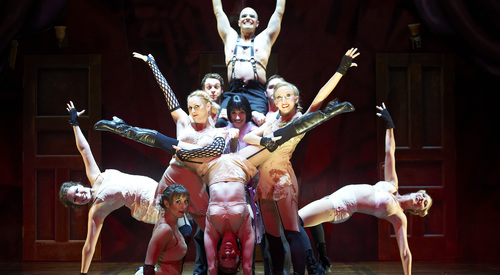 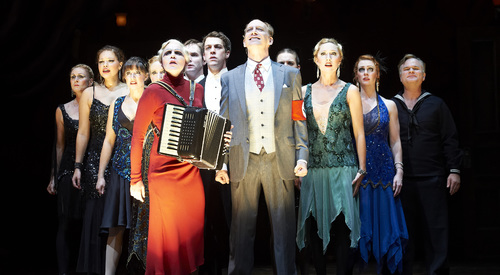 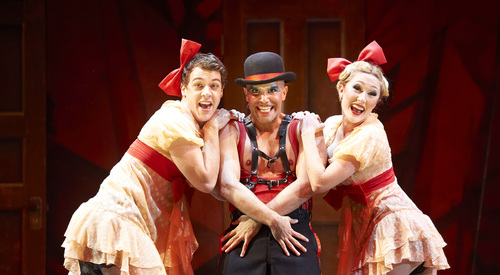 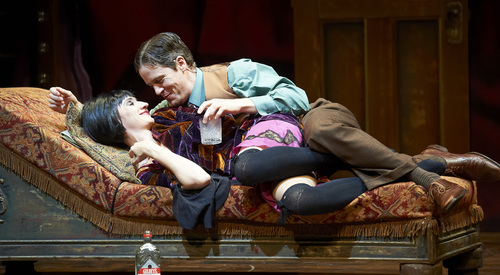 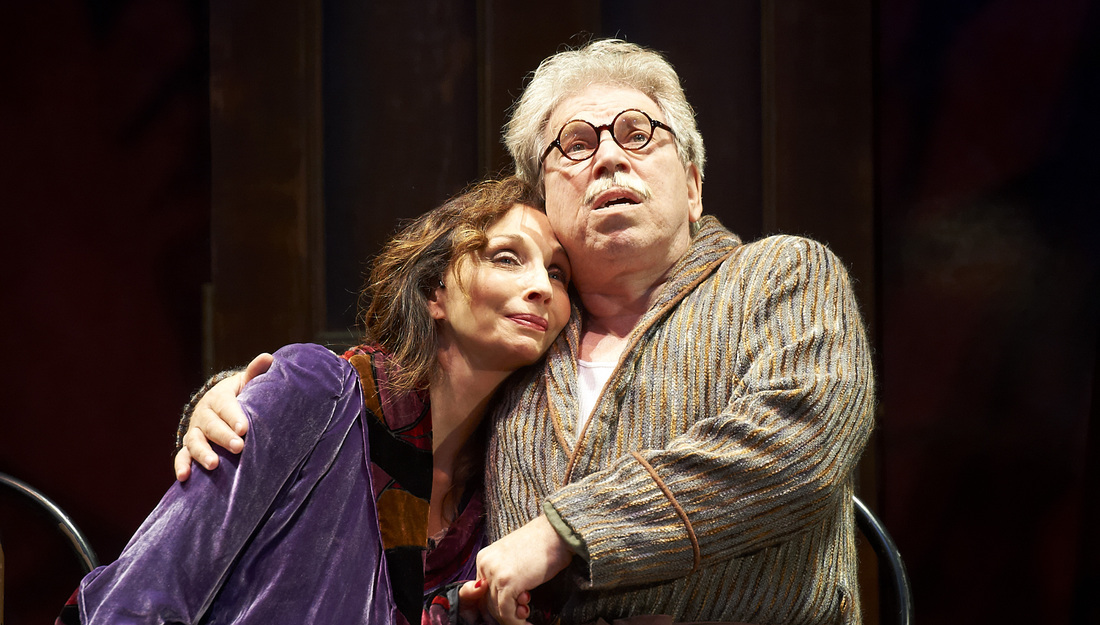 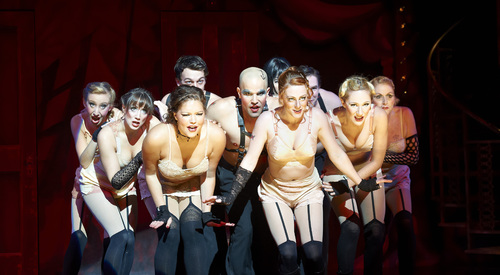 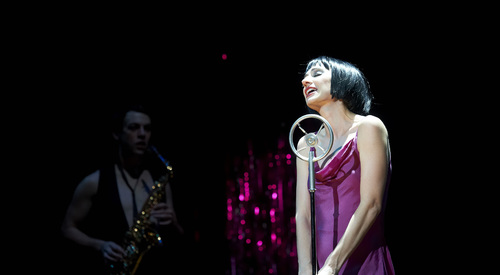 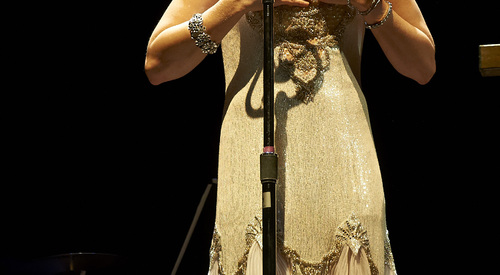 Act One
The action opens in the Kit Kat Klub, a decadent, seedy cabaret at the dawn of the 1930’s in Berlin. The Klub's Master of Ceremonies, or Emcee, together with the cabaret girls, welcomes the audience to the club. The action cuts to a train station downtown, where Clifford Bradshaw, a young American writer coming to Berlin in the hopes of finding inspiration for his new novel, is arriving on the evening train. On the train he meets Ernst Ludwig, an attractive young Berliner who appears to be in the smuggling business. When Cliff inadvertently helps him, Ernst gratefully gives him the name of a likely rooming-house in Berlin. When Cliff arrives at the boardinghouse, run by Fräulein Schneider, she rents the room to Cliff for half its usual price. Fräulein Schneider says that she has learned to take whatever life offers. Afterward, Cliff remembers that Ernst mentioned a cabaret—the Kit Kat Klub— and decides to visit it.

At the Klub, the Emcee introduces a British singer, Sally Bowles, who performs for the cabaret's audience. Afterward, she calls Cliff on the table-to-table phone and offers to buy him a drink. Their conversation is cut short by Max, the club’s owner, who watches Sally in a proprietary way.

In Sally’s dressing room, Max fires Sally, telling her that the club needs a fresh new face. Cliff turns up at Sally’s door and they briefly get to know each other before Sally heads back onto the stage for her final performance.

The next day Cliff is giving Ernst English lessons when Sally arrives. She tells Cliff that Max has thrown her out and she has no place to live, asking him if she can live in his room. At first he resists, saying she would be "much too distracting," but she convinces him (and Fräulein Schneider) to take her in. Directly after this scene, the Emcee and two female companions sing a song that comments on Cliff and Sally's unusual living conditions.

The action moves to Fräulein Schneider's apartment. Herr Schultz, an elderly Jewish fruit-shop owner who lives in the boardinghouse, has given Fräulein Schneider a pineapple as a gift. This scene is the beginning of a romance.

Months later, Sally and Cliff have been living together. Sally reveals that she is pregnant, but she does not know with whose child. She reluctantly decides to get an abortion. Cliff convinces her to have the baby. Ernst then offers Cliff a job--delivering a suitcase to his "client"--which Cliff accepts. The Emcee and the cabaret girls comment on this with a song.

Act Two
Fräulein Schneider expresses her concerns about her union to Herr Schultz, who assures her that everything will be all right. Their conversation is interrupted by the crash of a brick being thrown through the window of Herr Schultz's fruit shop.

Back at the Kit Kat Klub, the Emcee performs an upbeat song-and-dance routine with a person in a gorilla suit and sings of how their love has been met with universal disapproval. Fräulein Schneider then goes to Cliff and Sally's room and returns their engagement present, explaining that her marriage has been called off. When Cliff protests, saying that she can't give her fiancé up, she asks him what other choice she has.

Meanwhile, Cliff informs Sally that he is taking her back to his home in America so that they can raise their baby together. Though Sally protests, Cliff does not relent and tells her to pack her bags. Following their heated argument, Sally returns to the club to perform again.

When Sally goes back to her and Cliff's room, Cliff asks where her fur coat is. She answers, evasively, that she left it at the doctor's. Cliff realizes that Sally has had an abortion. Sally, devastated, says that she had hoped their relationship wouldn't end like this. Cliff says that he is leaving for Paris in the morning, hoping that she will join him. But Sally says that she's "always hated Paris." Cliff leaves, heartbroken.

As Cliff rides the train to Paris he begins to write his novel, reflecting on his experiences at the Kit Kat Klub and with Sally.

"There was a Cabaret and there was a Master-of-Ceremonies and there was a city called Berlin in a country called Germany and it was the end of the world...and I was dancing with Sally Bowles and we were both fast asleep..."

Perception can be a funny thing. We can literally decide what we actually want to see -- and what we would prefer to ignore. Cabaret is told through the somewhat cloudy eyes of Clifford Bradshaw, an American writer visiting Berlin in 1930. Those opening lines are actually the last words spoken by Cliff in the musical, Cabaret, as he finally opens his eyes to reality and begins to view the horror of the nightmare that has begun. The character of Cliff was based on novelist, Christopher Isherwood, who wrote an autobiographical account of the time he spent in Germany from 1929 to 1933 entitled "The Berlin Stories", which in turn inspired the John van Druten play, I Am a Camera, the basis for the musical, Cabaret.

In the original 1967 version of Cabaret, Cliff sings the haunting ballad, 'Why Should I Wake Up". The song was cut from later versions of Cabaret, making Cliff's role virtually non-singing; yet the lyrics, by a masterful Fred Ebb, give us fascinating insight into the mind of our unreliable storyteller.

"Why should I wake up, this dream is going so well. When you're enchanted, why break the spell?"

As Cliff immerses himself in the exciting, theatrical, if somewhat tawdry life of the Berlin Cabaret (a metaphor for Weimar Germany), he chooses not to see the changing atmosphere of oppression and prejudice emerging around him. Cliff fights to ignore the early warning signs of Nazi Party, preferring to remain in a state of mental intoxication.

"Drifting in this euphoric state, morning can wait, let it come late."

The questions have often been asked, "How could the genocide of World War II have taken place in front of our eyes?" "Why did the world take so long to recognize the danger of Hitler's rhetoric and respond to the atrocities being committed by the Nazis? Does history continue to repeat itself?

"Why should I wake up? Why waste a drop of the wine? Don't I adore you, and aren't you mine?"

The visual inspiration for our production of Cabaret comes from the daring painter, Georg Grosz, an artist of the Weimar Republic. There is an exuberant, dangerous energy to his work, the vibrant colors leap off the canvas; yet, within the titillating scenes of the wild Berlin nightlife lie images of horrendous violence and murder. Life, as painted by Grosz, is lived on the brink in bold garish colors; the characters in his paintings and in the musical alike turn a blind eye to destruction -- even self-destruction -- until it is too late. Cabaret gets at a truth that is often only realized in hindsight -- the signs were all there if one wanted to see them.

"Maybe I'll someday be lonely again, but, why should I wake up, till then."