The World's Most Famous Tragedy

When his suspiciously widowed mother swiftly marries his uncle, amidst demands for revenge from his murdered father’s ghost, the young prince Hamlet resolves that something is indeed “rotten in the state of Denmark.”

Forced by circumstance into a world turned upside down by betrayal, distrust and madness, Hamlet spirals through a torrent of erratic emotion and bizarre behavior in a relentless pursuit of truth. Torn between duty and doubt, he wrestles tenaciously with the profound question “to be or not to be,” until fate exacts its final answer.

Consider ONSTAGE or STAGESIDE seating when planning your visit to enjoy the fullness of this unique production. (Onstage and Stageside seats are padded benches with backs similar in style to church pews. The bench seat is padded. Seating is assigned.)

The role of Hamlet will be played by two actors (Laura Welsh Berg and Jonathan Dyrud) during the run of this production. The actors will alternate by performance. Click here to view a performance schedule with complete information.

Generous support for HAMLET was provided by John and Barbara Schubert.

HAMLET is part of Shakespeare in American Communities, a national program of the National Endowment for the Arts in partnership with Arts Midwest.

Additional generous production support for HAMLET was provided by the Susan and John Lebold Family. 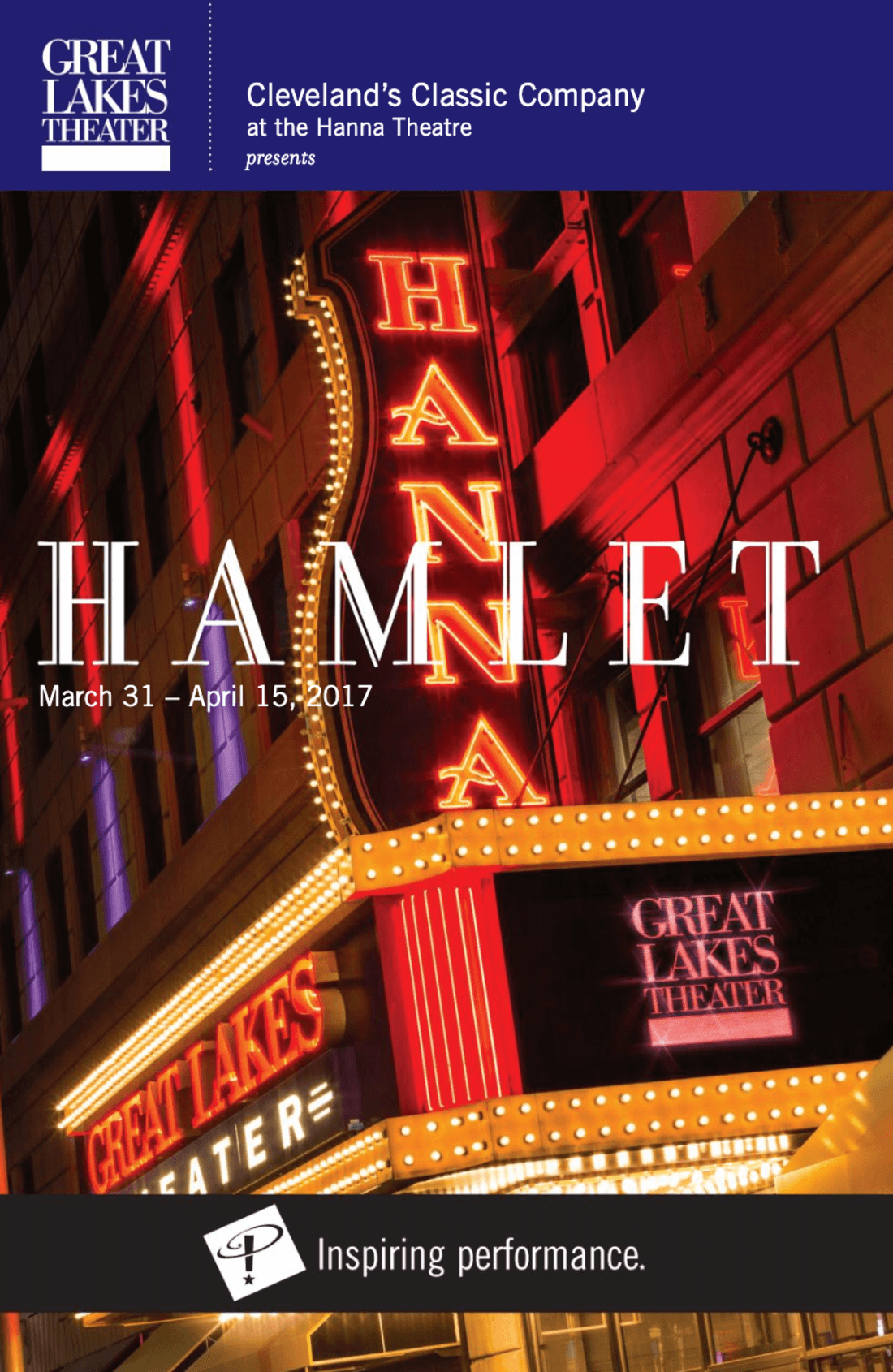 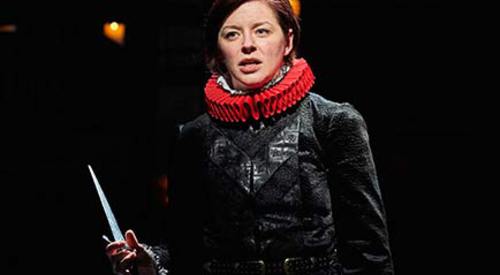 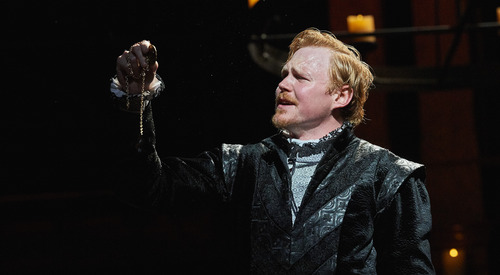 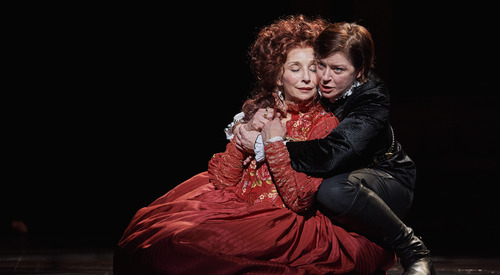 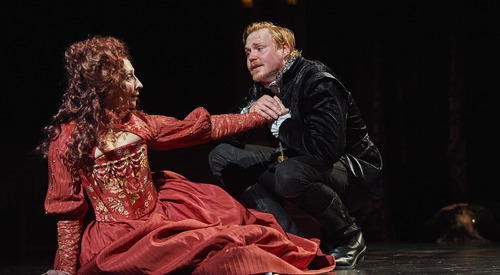 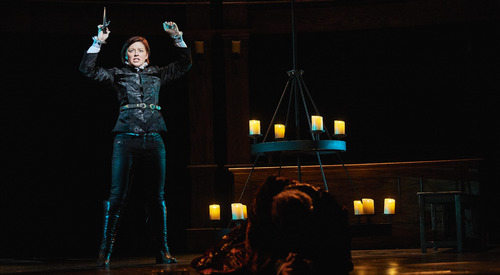 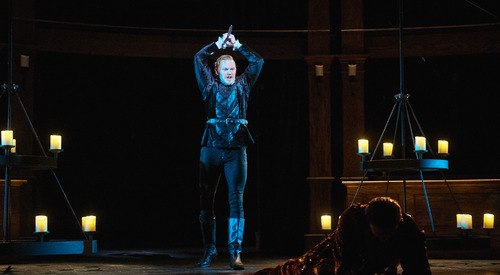 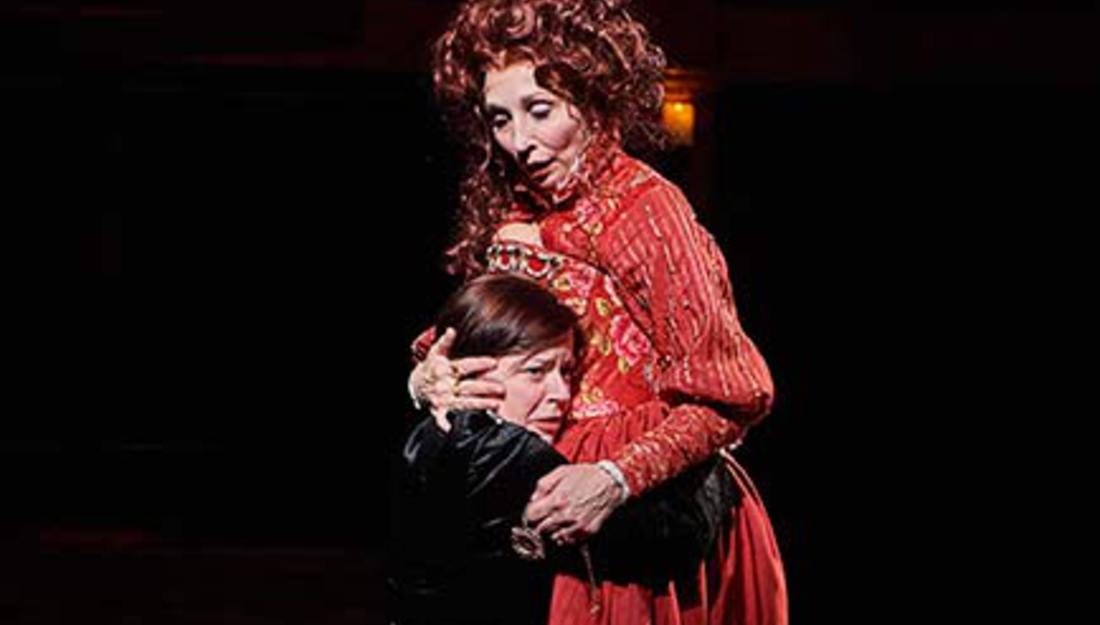 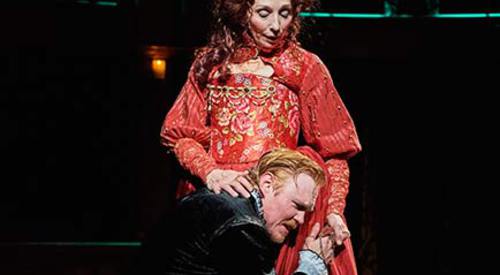 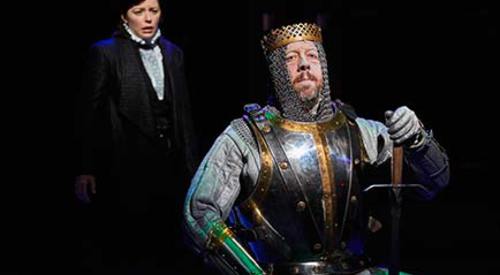 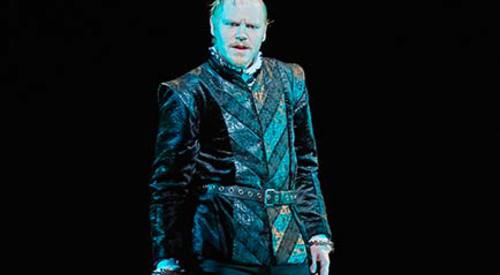 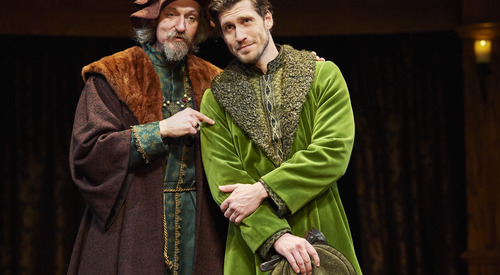 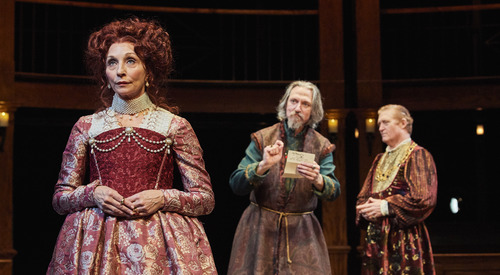 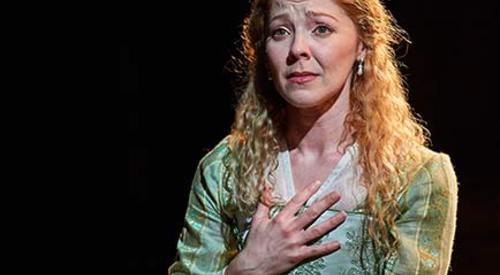 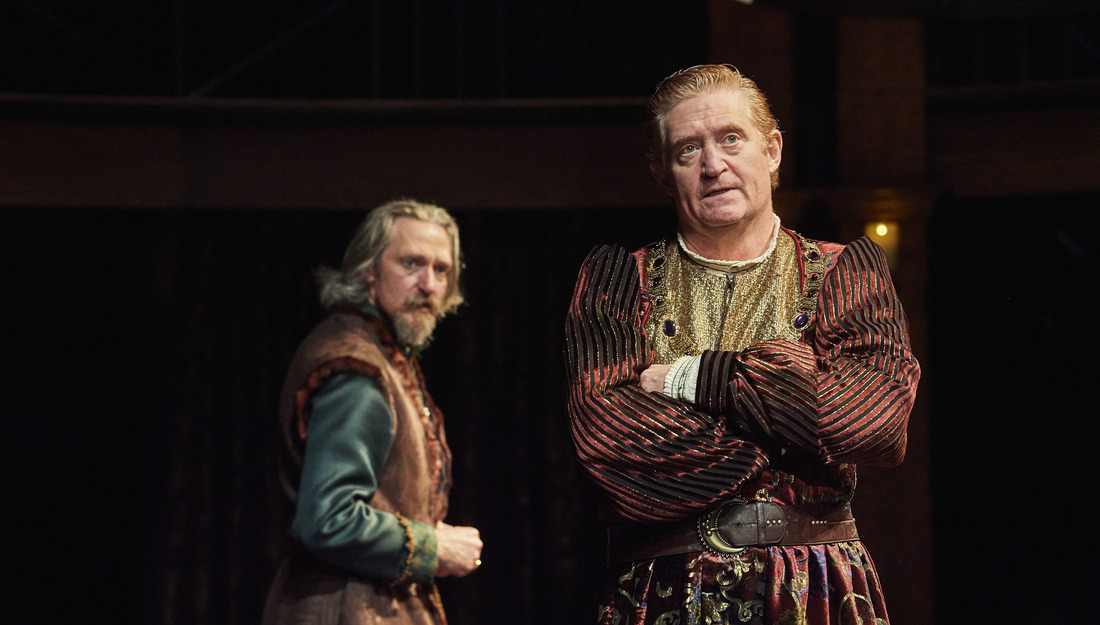 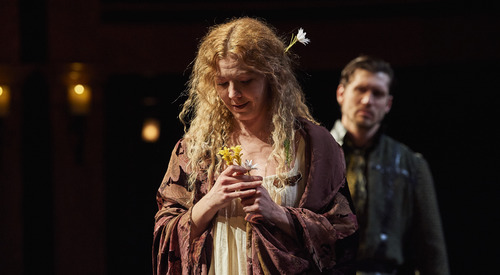 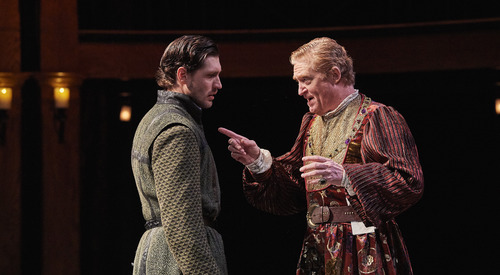 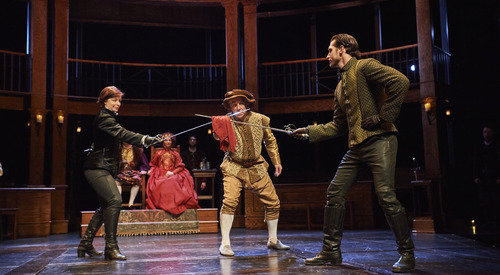 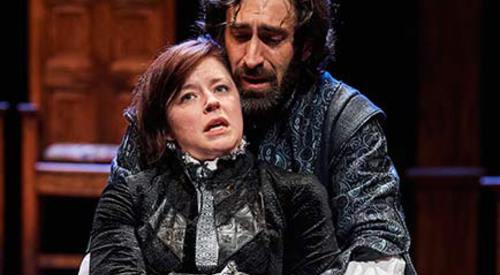 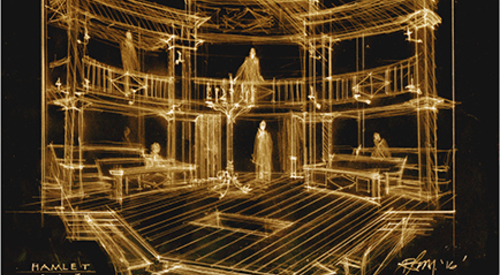 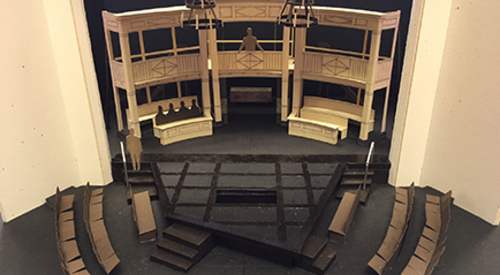 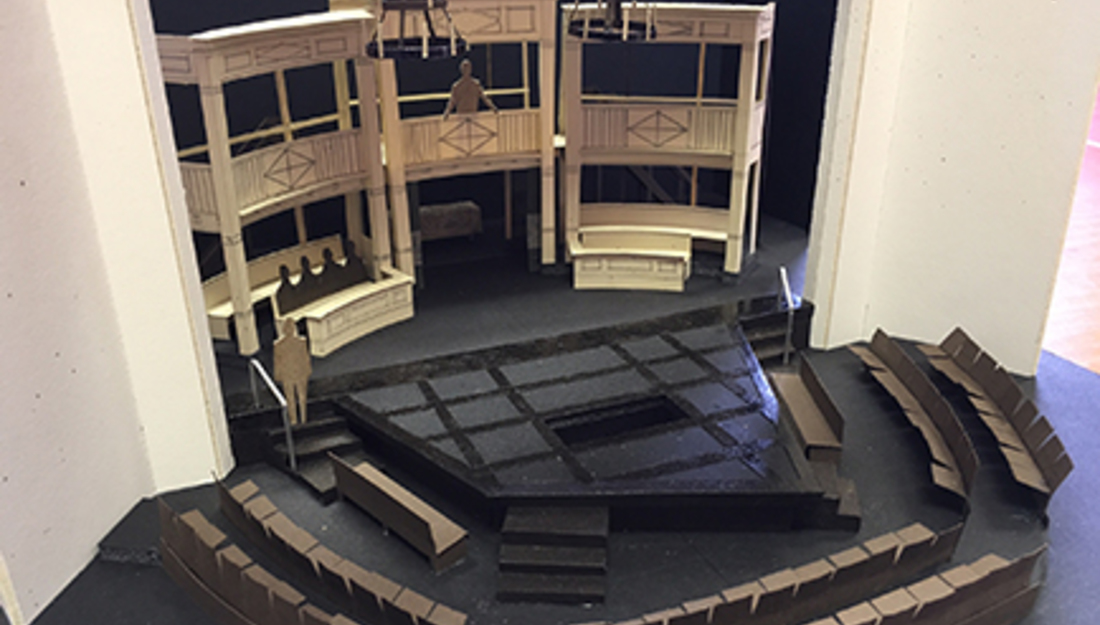 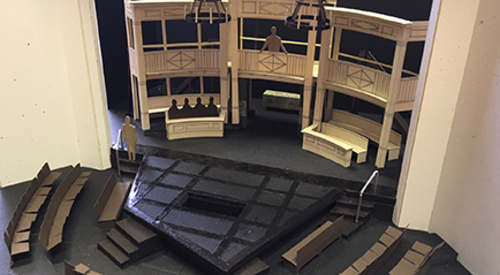 Events before the start of Hamlet set the stage for tragedy. When the king of Denmark, Prince Hamlet’s father, suddenly dies, Hamlet’s mother, Gertrude, marries his uncle Claudius, who becomes the new king.

A spirit who claims to be the ghost of Hamlet’s father describes his murder at the hands of Claudius and demands that Hamlet avenge the killing. When the councilor Polonius learns from his daughter, Ophelia, that Hamlet has visited her in an apparently distracted state, Polonius attributes the prince’s condition to lovesickness, and he sets a trap for Hamlet using Ophelia as bait.

To confirm Claudius’s guilt, Hamlet arranges for a play that mimics the murder; Claudius’s reaction is that of a guilty man. Hamlet, now free to act, mistakenly kills Polonius, thinking he is Claudius. Claudius sends Hamlet away as part of a deadly plot.

After Polonius’s death, Ophelia goes mad and later drowns. Hamlet, who has returned safely to confront the king, agrees to a fencing match with Ophelia’s brother, Laertes, who secretly poisons his own rapier. At the match, Claudius prepares poisoned wine for Hamlet, which Gertrude unknowingly drinks; as she dies, she accuses Claudius, whom Hamlet kills. Then first Laertes and then Hamlet die, both victims of Laertes’s rapier.

Two Hamlets:
In choosing to double cast the role of Hamlet with a woman and a man playing alternate performances, we are exploring the possibility that Hamlet’s nature and his responses to the dramatic action may reveal more depth and elicit more compassion than we would experience through a single actor’s interpretation of the role. Is it possible, for instance, that a woman playing Hamlet will allow us to experience his relationships to Gertrude and Ophelia from a profoundly different perspective, perhaps opening up the text in unique ways? What about his relationships to his father’s ghost and his uncle Claudius? And might both actors’ performances be affected by working together on the role in rehearsal?

Hamlet’s relationship to his mother, Gertrude, and his “beloved” Ophelia, are deeply troubling, both to him and to most modern audiences. His sense of betrayal by both women—first by his mother for marrying his uncle (an act that he views as adulterous and incestuous); and then by Ophelia, for giving back his love letters and tokens—seem to infect his view of all women: “Frailty, thy name is woman.” But his cruelty toward Ophelia is contradicted by his professed love for her. The first time we see Hamlet speak to Ophelia his words are fraught with ambiguity: “I did love you once,” he says, only to follow with, “You should not have believed me . . . I loved you not.” What are we in the audience to believe? Is this madness? Or is Hamlet feigning madness? Or, as the noted Shakespearean scholar, Harold Bloom asserts: “The question of Hamlet must always be Hamlet himself, for Shakespeare created him to be as ambivalent and divided a consciousness as a coherent drama could sustain.” Perhaps casting two actors as different as Laura Berg and Jonathan Dyrud are, is an acknowledgment of Hamlet’s divided soul.

Setting & Space:
We have chosen to set Hamlet in the Elizabethan period for several reasons. Foremost is our desire to create a stage structure similar to that of the Globe Theatre in which Hamlet was performed. Our scenic design will allow part of the audience to sit onstage, surrounding the actors, as well as on either side of the platform downstage. With this choice we are inviting the audience onstage to create a sense of participation in the action of the play. For those sitting onstage the experience may feel like being in the play rather than passively watching the play. For those sitting in the traditional location in front of the stage, the audience onstage will appear to be in the play – like a jury in a court room judging the events as they unfold. The stage side seating works to increase the pressure of the audience in relationship to the action onstage.

All of this could have been achieved without setting the play in Elizabethan costumes. The period costuming is being created as a way of relating the ideas of the play to the historical context of the Elizabethan Renaissance and specifically, the Protestant Reformation – as opposed to the historical source material of Hamlet (Saxo Grammaticus’ 12th century history of Denmark). Hamlet’s education at the University of Wittenberg – where Martin Luther was on the faculty – is referred to 3 times in Hamlet’s first scene. For the audience of Shakespeare’s time this was clearly meant to signal that Hamlet (and Horatio) have been exposed to both a Renaissance humanist education (note how many references they make to Greek and Roman writings) and the teachings of Martin Luther. Shakespeare’s audience was actively engaged in the ideas and arguments of the Reformation and humanist thought. It is our desire to foreground this historical context through our Elizabethan period setting and costumes.

Our Text:
There are many existing texts of Shakespeare’s Hamlet. Most scholars consider the Second Quarto (published 1604) and the First Folio (published 1623) as the editions closest to the author’s intentions; however, these texts vary greatly from each other. The Second Quarto is over 4,000 lines long (nearly twice the length of the First Quarto edition) and is generally believed to derive from Shakespeare’s written manuscript. Given its extreme length, it is unlikely that this script would have been performed by Shakespeare’s company (compare to Macbeth at 2,477 lines). The First Folio text is considerably shorter and was probably derived from the theater promptbook. We are primarily using the First Folio text as the starting point for our production, but we have included some of the Second Quarto text as well. In any production of Hamlet, the director and actors must make decisions about what to keep and what to cut. Without cutting, the Second Quarto Hamlet would take nearly five hours to perform! The most significant editorial decision we have made is to remove virtually all references to the Fortinbras plot, and the character of Fortinbras does not appear. It is our belief that the parallel revenge plots of Hamlet and Laertes give the audience the deepest experience, and contrast, of the themes of justice and revenge.