The Merry Wives of Windsor

An Uproarious Battle of the Sexes

Meet the rotund rascal Sir John Falstaff and the wise wives of Windsor in one of Shakespeare’s most raucous comedies.

With an ego as big as his voracious appetite, Falstaff conspires to woo the two wealthiest married ladies in town and pocket their riches. However, Mistress Ford and Mistress Page devise a scheme of their own to teach him a well-deserved lesson in Wooing 101. Join us and feast on a hilariously magnificent treat of monogamously artful deceit.

Generous support for this production was provided by The Business Alliance of Great Lakes Theater.

The Merry Wives of Windsor Playbill 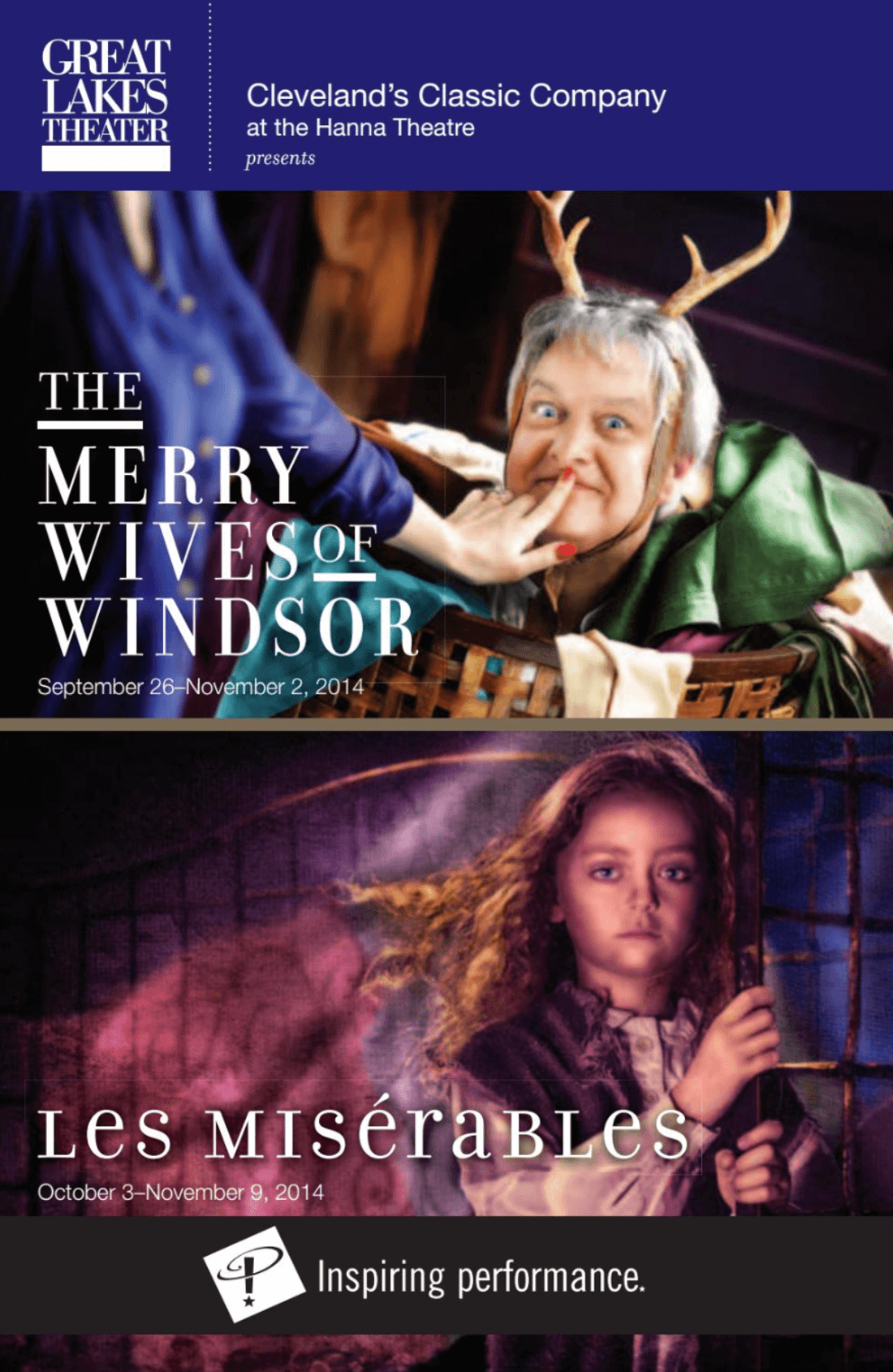 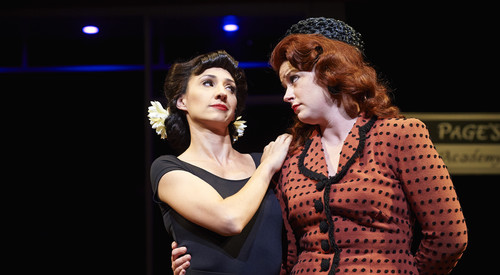 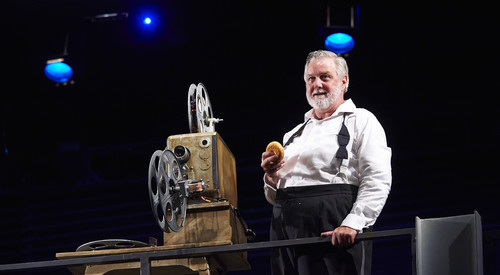 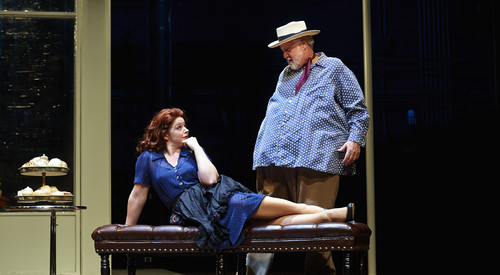 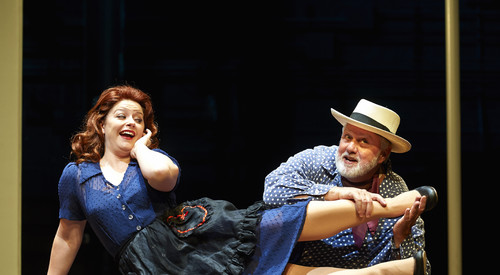 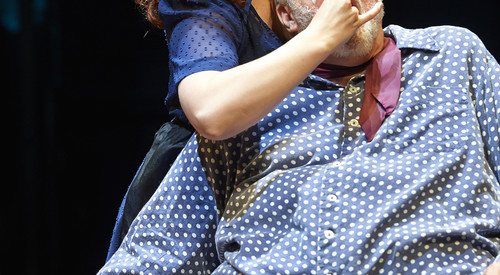 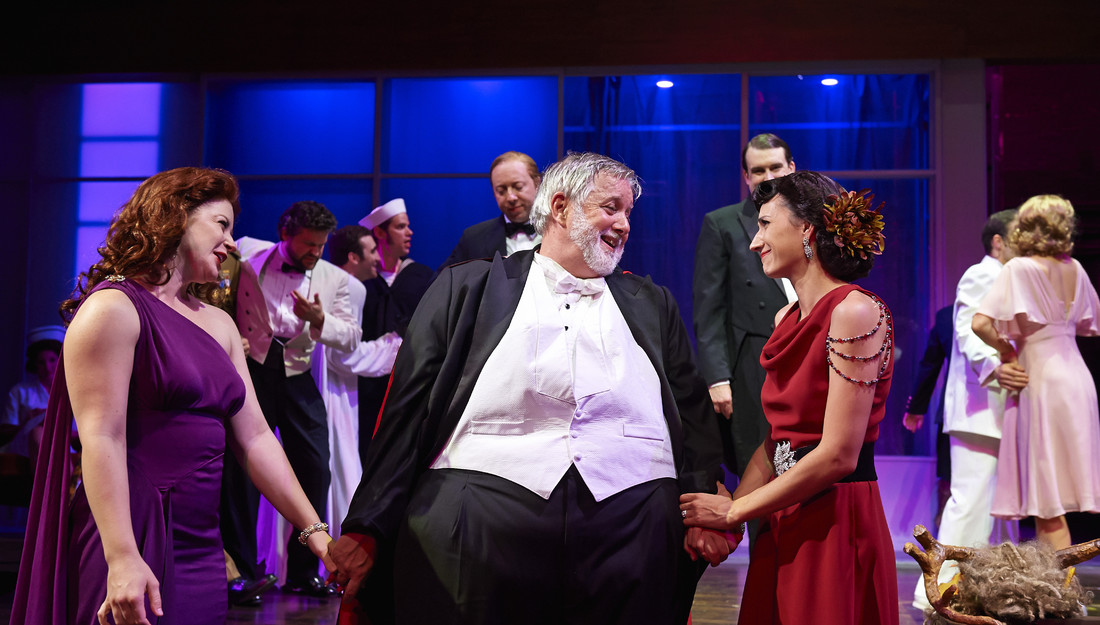 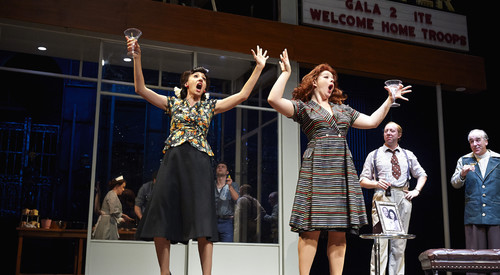 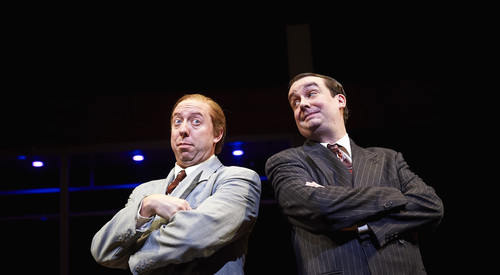 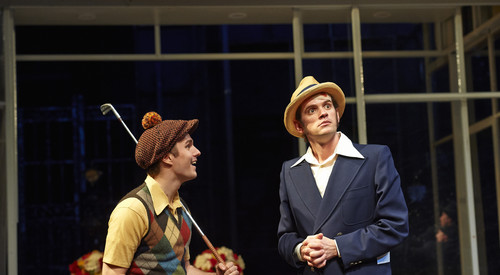 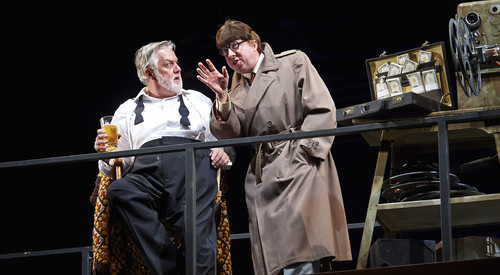 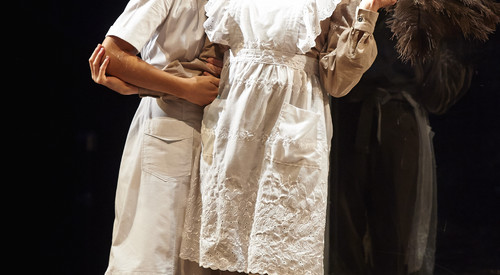 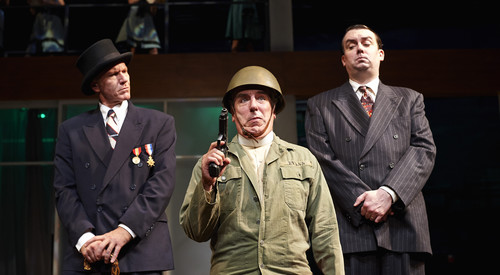 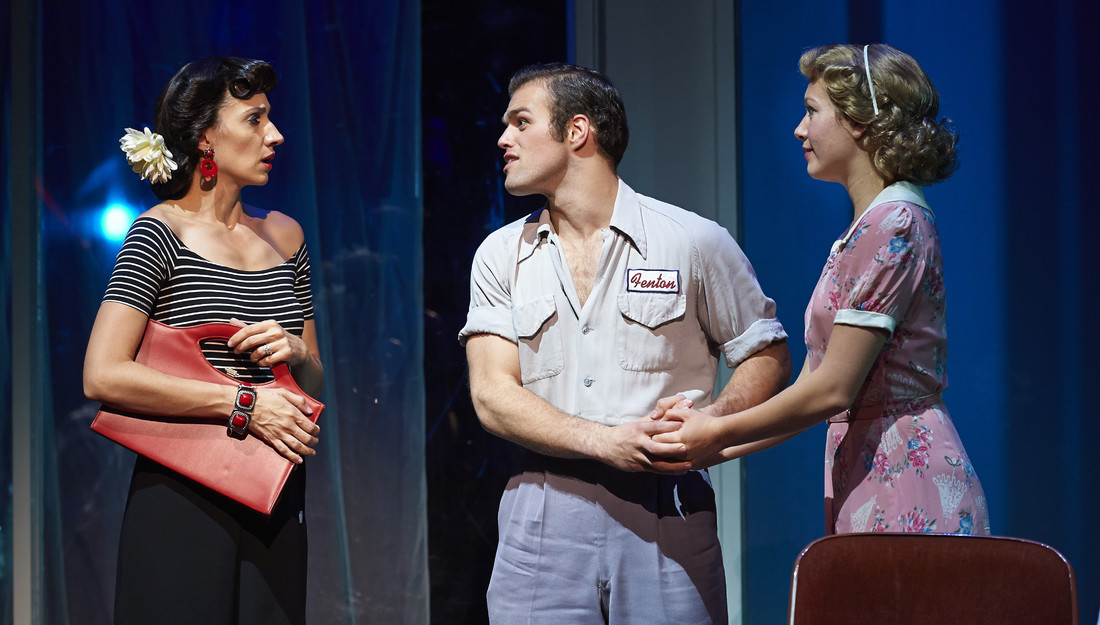 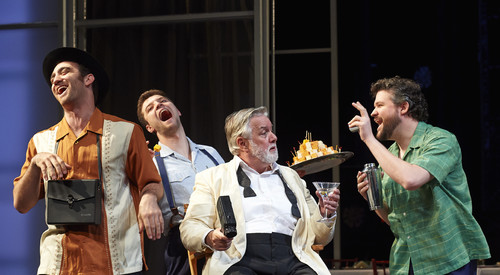 Falstaff arrives in Windsor short on money. In an effort to solve his financial woes, he decides that he will court two wealthy married women, Mrs. Ford and Mrs. Page. Falstaff sends the women identical love letters and asks his associates– Pistol and Nym – to deliver them to the wives. When they refuse, Falstaff sacks them, and, in revenge, the men tell the husbands of Falstaff's intentions. Mr. Page is not concerned, but Mr. Ford's jealousy is inflamed.

Meanwhile, three different men are trying to win the hand of Mr. Page's daughter, Miss Anne Page. Mrs. Page would like her daughter to marry Doctor Caius, a physician, whereas the girl's father would like her to marry Mr. Slender, the nephew of the wealthy Mr. Shallow. Anne herself is in love with Mr. Fenton, but Page has rejected Fenton as a suitor due to his having squandered his fortune on extravagant living.

When the wives receive Falstaff's letters, each informs the other, and they discover that the letters are identical. For their own amusement and to gain revenge for his indecent assumptions, the wives pretend to respond to his advances.

Mr. Ford becomes suspicious of his wife's fidelity and poses as 'Mr. Brook', who offers to pay Falstaff to court her, saying that once she has lost her honor he will be able to tempt her himself. Falstaff cannot believe his luck, and tells 'Mr. Brook' he has already arranged to meet Mrs. Ford while her husband is out.

When Falstaff arrives to meet Mrs. Ford, the wives trick him into hiding inside a basket to avoid discovery by the jealous husband. The wives then have the basket taken away and the contents (including Falstaff) dumped into the river. Although this affects Falstaff's pride, his ego is surprisingly resilient. He is convinced that the wives are just "playing hard to get", and so he continues his pursuit of them.

Again Falstaff goes to meet the women but Mrs. Page comes back and warns Mrs. Ford of her husband's approach again. This time they trick Falstaff into disguising himself as Mrs.Ford's aunt, but Mr. Ford ends up beating him anyway.

Eventually the wives tell their husbands about the series of jokes they have played on Falstaff, and together they devise one last public humiliation for Falstaff, involving a pageant being enacted by residents of the town. During the pageant, each of Miss Anne Page's suitors attempts to steal her away, with Mrs. Page aiding Dr. Caius and Mr. Page aiding Slender. However, Fenton escapes with Anne.

Once the joke is played out on Falstaff, he accepts his punishment surprisingly well, and sees it as deserved. Fenton and Anne return and announce they have been married. Fenton chides the parents for trying to force Anne to marry men she did not love and the parents accept the marriage and congratulate the young pair. A celebration begins and Mrs. Page happily invites Falstaff to join the festivities.

The end of the Second World War was a particularly galvanizing time in American history. The country as a whole shared great optimism about the future prosperity of the new “Baby Boomer” generation, and yet at the same time experienced a more complicated and darker awareness of humanity overall. America had strong regard for its moral fabric and also an increasing doubt about the durability of that fabric. Tensions between ideals of community and individualism, transformations of accepted notions of status, and evolving expectations of traditional gender roles introduced changes in American society that would unfold over the next fifty years. Soldiers returned home to spouses and both partners often struggled with the distance that had come between them, both literally and figuratively. Shakespeare’s The Merry Wives of Windsor explores similar expectations and tensions, and this adaptation carries them into the period just after the war, when triumphant feeling struggled with the realities of a threatening world. “Merry Wives” is about feeling like an outsider to a community and finding identity within it, and about how a community can support or inhibit self-expression.

The play good-naturedly, but pointedly skewers our weaknesses. Jealousy is represented in at least three other Shakespeare plays as a potently destructive force, but in “Merry Wives,” we can recognize and grow from it. Lustfulness and a propensity for gossip and deceitfulness appear in this play as potentially but never quite destructive. The play is constructed to a human scale, and with a generosity towards the characters that inhabit its world. Shakespeare’s Falstaff is a paragon of human foibles, and in The Merry Wives of Windsor he is the figure most alien to the play’s community.

What is it about Falstaff? Why is this larger than life figure so memorable and so prone to take up residence in our hearts and imaginations? Referred to as a “fat knight”, he embodies a laundry list of vices; he is lazy, slovenly, a drunkard, a womanizer, a thief, a braggart, a coward and a prevaricator. And yet, we can’t get enough of him. Perhaps it is because Falstaff represents the joy of freely following our impulses without concern for the consequences. But then, inevitably, the consequences of hedonistic living come to pass--obesity, alcoholism, poverty, and perhaps most meaningfully the rejection of one’s community. Falstaff is brought down by his unbridled ways and rejected by the young king in the Henry plays. But there is no delight in watching Falstaff get his comeuppance there, for we still harbor a love for him, and the way he mirrors us in our most childlike selves. Shakespeare is rumored to have been encouraged by Queen Elizabeth I to write a light hearted romp for Falstaff. In Shakespeare’s wisdom, this rollicking work framed Falstaff as an outsider who, by his very way of being, challenges the community to confront its notions about morality and acceptance of difference. Once again, Falstaff suffers rejection and humiliation for his shortcomings, but ultimately Shakespeare uses the community’s embracing of Falstaff as a symbol of enrichment and growth.

Lastly, though, it is useful to remember that Shakespeare titled this play The Merry Wives of Windsor, and for good reason. The play is centered not around Falstaff but around the women of the story, the “Merry Wives”. They are the engines that drive the action of the play, and they seem to relish their role. The ladies Ford and Page are fiercely intelligent, witty and yet also seem content to wield power within their proscribed roles as wives and mothers. These women provide a pointed contrast to other hyper-intelligent Shakespearean women who are often thwarted and limited by their gendered roles (Lady Macbeth and “shrewish” Kate come to mind). In “Merry Wives”, the women find ways to maneuver in their own, albeit limited, milieu. They mete out the standards around which the community rallies and establish the “rules of combat”. At the end of the play, Falstaff is welcomed into the community by one of the wives who can see past his limitations and embrace him with forgiveness that transcends his foolishness. It is ultimately that final grace note that offers the most stirring and heartfelt moment of the play, in recognizing that shortcomings are shared by everyone, and that forgiveness is always possible.